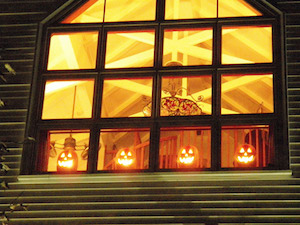 A Story About Eternal Punishment

Warning: Not for the faint of heart, faint of stomach, or easily offended. This is horrible, disgusting, and offensive.

When Rusty Thorne woke up on Saturday, January 22nd, he had no idea the sort of day that would befall him – or that it would be his last. He had not the least idea of the significance of the two men in suits purchased from the thrift store who appeared at his door at 12:23 PM. If he had, he would never have answered it.

“Mister Thorne,” said the one on the right, “We would like to invite you to believe.”

“No thank you,” said Rusty. “I’m a good Catholic, and I have no interest in joining another religion.” He began to close the door, but the man in the ill-fitting suit on the left shoved his foot in the door and continued.

“Mister Thorne, hear us out.” Rusty shook his head, but the foot was still in the door, so he had no choice. “We belong to a group called The Taloc. It is a small and ancient group. First, do you know what sin is?”

“Not quite,” said the one on the left. “Sin is a breaking of the moral order. All sin must be punished. For ever.”

“That’s lovely,” said Rusty, “but this is America. I agree that wrong beliefs have consequences. Your wrong belief, for example, that I want to hear what you have to say, is going to have the consequence of getting my front door slammed in your face.”

With that, Rusty kicked Left Guy’s foot out of the door and slammed it. He double-locked it for good measure.

It was January, of course, and Rusty, like any good Catholic, was doing his taxes early so that he could spend his refund as early as possible. Little did Rusty know that the men who appeared at his door had been his last chance to make a decision that would affect him for all eternity.

Like any good American, Rusty filled in his income tax return with a few fudges. He didn’t report money he’d spent online, and he conveniently left out a few hundred dollars he’d made under the table. Little did Rusty know that this decision would haunt him for all eternity.

Rusty strolled off to the post office, whistling a song from the radio, having forgotten all about the weirdos who had appeared at his door earlier. He checked the Saturday pickup time, dropped his income tax return in the blue mailbox, and turned around to go back home. That was his mistake.

The next two things Rusty saw came in quick sequence: He saw a black van driving right toward him, and then he saw bright stars on a background that quickly turned to black.

When he came to, he was laying on a bed of nails or hot coals, he couldn’t tell which one. There was a horrible burning sensation in his eyes, and he couldn’t see a thing. But he could hear. And what he heard horrified him. It was screaming. Not just any screaming, mind you, but the screaming of dozens of tormented human beings – the screaming of human beings who are being brutally and horrifically tortured and burned, having lost all hope of ever being saved. “Who’s there?” Rusty demanded. “What have you done to me?”

“I am Huey,” replied the voice. “I am the god of the world. You should have listened to my servants when they visited you earlier today.”

“The two religious nut-jobs who showed up at my door today?” Horrible pain shot up and down Rusty’s body.

“Do not speak evil of the lord’s elect, Rusty,” Huey replied softly. He paused. “Do you know why you are here?”

“Because I didn’t listen to your insane people?”

“No, Rusty,” replied Huey, still speaking kindly. “You are here because you sin often, and I decided that your time to continue in sin was over.”

“You cheated on your tax return,” Huey replied. “That was enough. Now you will suffer for all eternity.”

“No, Rusty,” said Huey. “You made your decision. And you didn’t listen to my servants and accept the gift I was going to offer you — a full pardon.”

“If I had known those wackos were telling the truth, I would’ve — “

“But you didn’t, Rusty. Now you’re mine, for all eternity.”

“You keep saying that! I could die.”

“No, you couldn’t, Rusty. My torturers are skilled. They will torment you everywhere until the pain becomes unbearable, but not until you lose consciousness. You will be in horrible agony every instant of every second of every day. Oh, and as for days, there is only one day: This one. Today will start in five minutes, and due to some quantum physics you can’t even begin to understand, after your torture begins, the hell you are living in will loop. Forever.”

“I’m sorry, Rusty. I love you… but I am fair. I gave you your chance. Now you must be tortured, in sheerest of sheer agony, for all eternity. Perhaps your life can serve as an example to others.”

“No, I’m fair,” said Huey. “I even killed my own son so that you wouldn’t have to end up here, but you didn’t listen to my servants and accept the life I offered. I can only ever do right. I am the judge of the world. I love you, Rusty, but you rejected me. Take him away.”

And then the pain that he endured. I say endured because he could not do otherwise. They wouldn’t kill him. He felt that his entire body was in flames all day, and his nerves never dulled, and the pain never slowed. His fingers were contorted. The unimaginable torture continued day and night, though he couldn’t see day or night. He sensed when the days were looping, a little, though he was never sure. At first, he hoped that it was not true.

And so it was that a decent man who had sinned in one small way found himself tortured and tormented by a righteous man for all of eternity.

“To say on the authority of the Bible that God does a thing no honourable man would do, is to lie against God; to say that it is therefore right, is to lie against the very spirit of God. To uphold a lie for God’s sake is to be against God, not for him. God cannot be lied for.” -George MacDonald, “Justice”

Question:
Setting aside the fact that Huey is a wicked, horrible person, possibly the only character ever invented deserving of eternal suffering, is what Rusty gets just?

We think Huey is wicked because he tortured Rusty for all eternity just for cheating on his taxes. We think he’s a horrible, awful, wicked sicko. And we think that God is just in doing that.

Our response is simple: God is just, and God does that.

We challenge anyone who questions this by suggesting that they are heretics. Those who question the eternity of torment in hell are told that God is just, God torments some for eternity in hell, and therefore, that is just. And we accept this to be true, in spite of the niggling feeling in the backs of our minds that it doesn’t make sense. We overrule it by saying that God’s ways are not ours. But we never dare to question whether or not eternal torment makes sense because we have been told that God does it and God is just.

For that not to be the case, it must be that either (a) God is not just, or (b) God does not torment people for sins committed in a few short years for all eternity. God’s justice is shown forth throughout scripture. And eternal torment, though its followers have a long list of verses they insist prove eternal torment, has a number of verses that suggest its opposite.

There are those who believe that God is just, and, being a just God, could not possibly torture people in burning awfulness for all eternity for sins committed in time, and who do not question the Bible’s authority.

8 thoughts on “Lies Against God : Huey”