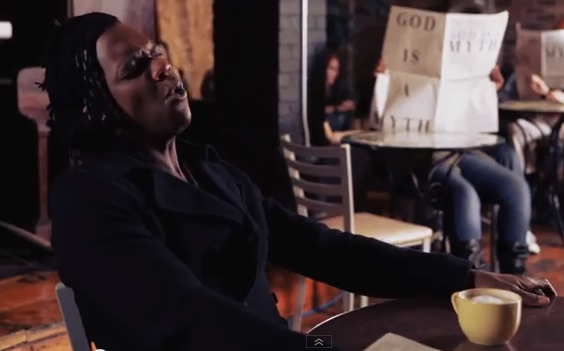 In a statement released today, scientists have concluded that, based on their research, God is a myth.

These words open the music video to the Newsboys’ music video “God’s not dead” (embedded below).

A newspaper headline in the video says “God is a myth.” A billboard reads “No evidence that God exists.” An article online says A tweet comes across a smartphone that says “God is dead,” with an image of Christ carrying the cross. A man reads an article that says “Man is just another animal.” A tweet pops up on a screen that says “Everything came from nothing.” Another man watching a news show on his iPad sees a news anchor discussing “How can God allow evil?” He looks up in shock and disgust, and then the chorus starts:

The video’s Christians (I think they’re the band members) immediately correct the misinformation being spread. One writes a blog titled “We are made in the image of God.” The twitter user replies “everything came from SOMETHING!” The man watching the news video switches furiously to a video titled “God Gave Us Freedom to Choose. Man Chose To Do Evil!” Then he gets up with a self-vindicated look on his face. And the Newsboys’ lead singer slaps his newspaper titled “God’s Not Dead” over another reader’s paper that says “God is a Myth.” And then the chorus starts again. Everyone gets happy. People watch a video that says “Complexity of Life Points to Design.” Another blog says “I was dead but am alive forevermore. -Jesus.” At a (Newsboys) concert, people hold up signs that say “God’s Not Dead.”

For what audience is this video and song intended? If it’s for a non-Christian audience, it is highly unlikely to convince them. They are more likely to view “God’s not dead” (if they view it at all!) as proof that Christendom’s smug self-assurance will continue.

Nietzche
I looked up Friedrich Nietzsche, the originator of the “God is dead” quote. As it turns out, Nietzsche, like many who are violently anti-Christian, grew up on (surprise!) some variation on Christian. He was raised Lutheran. He even went to seminary to become minister in his father’s place. However, he found Christianity squashing. Pushing. Crushing. He came to believe that mankind could only ever truly be free if we got rid of the idea of a God who was going to get us for everything bad we did. I can sympathize with his frustration, honestly. And in spite of Nietzsche’s dislike for what went for Christianity, Christopher Rodkey says that Nietzsche had a great deal of respect for Jesus.

The quote “God is dead” comes from Nietzsche’s book The Gay Science (which had nothing to do with homosexuality, by the way). It’s from a chapter called “The Madman.” In it, a madman rushes into the town square:

“Whither is God?” he cried; “I will tell you. We have killed him—you and I. All of us are his murderers. But how did we do this? How could we drink up the sea? Who gave us the sponge to wipe away the entire horizon? What were we doing when we unchained this earth from its sun? Whither is it moving now? Whither are we moving? Away from all suns? Are we not plunging continually? Backward, sideward, forward, in all directions? Is there still any up or down? Are we not straying, as through an infinite nothing? Do we not feel the breath of empty space? Has it not become colder? Is not night continually closing in on us? Do we not need to light lanterns in the morning? Do we hear nothing as yet of the noise of the gravediggers who are burying God? Do we smell nothing as yet of the divine decomposition? Gods, too, decompose. God is dead. God remains dead. And we have killed him.

Nietzsche’s madman challenges me. He pushes my preconceptions, forces me to re-examine what I think and search for new reasons to believe. He reminds me of a story from an old book in which a man who claims to be God is crucified.

If, however, the Newsboys’ song is for Christians, it may be even worse than if it’s intended for non-Christians. It reinforces our preconceptions. It reminds us in short form of all the reasons we should believe, provides bumper-sticker responses to the hard questions, and the video shows us that an angry disunderstanding should pervade our interactions with those who disagree with us. Rather than enter into a dialogue, rather than reading what those who disagree with us have to say, we should simply put our fingers in our ears and utter a diatribe: GOD’S NOT DEAD, HE’S SURELY ALIVE! Because that is what’s most likely to convince the skeptics and convert the unbelievers. (Just kidding) The Newsboys respond to Nietzsche’s madman in like: The madman says God is dead, the Newsboys say God’s not. This conversation would be appropriate. …If the Newsboys were 2-year-olds.

I find “God’s Not Dead” immensely troubling on two counts: First, it fails to provoke its audience as good art should, and second, it further polarizes those who believe and those who do not.

Good art provokes. It flips our pre-conceptions and slips in another way of seeing things. In an episode of the BBC TV show Doctor Who titled “Vincent and the Doctor,” the Doctor visits Vincent Van Gogh. At the end, Van Gogh shows the Doctor and his companion what he sees when he paints Starry Night:

Van Gogh: Hold my hand, Doctor. Try to see what I see. We’re so lucky we’re still alive to see this beautiful world. Look at the sky. It’s not dark and black and without character. The black is in fact deep blue. And over there! Lights are blue. And blue in through the blueness, and the blackness, the winds swirling through the air… and then shining. Burning, bursting through! The stars, can you see how they roll their light? Everywhere we look, complex magic of nature blazes before our eyes.

The Doctor: I’ve seen many things, my friend. But you’re right. Nothing’s quite as wonderful as the things you see.

Art shows us what was always there but we never saw. It tilts the frame so we see things anew. It puts words to our hearts’ deepest dreams, longings, and fears. It shows us things we’ve seen a million times in a way we’ve never seen them before, and it shows us things we never imagined could be true that are. It provokes us, pushes us to see the world in a different way. It lets us see the world through the soul of another. “God’s Not Dead” does none of these things.
* * *
Fifteen years ago, Rich Mullins said that the current trends in Christian music were “Shallow, mindless, stupid, and perfectly harmless at best.”

“God’s Not Dead” allows both parties to adopt a rather smug self-righteousness: the non-Christians can say “Those stupid Christians” and the Christians will say “Those stupid non-Christians.” We hold up our slogans and they hold up theirs, and absolutely nothing good comes of any of it. Worse than failing to further the dialogue, “God’s Not Dead” turns the serious conversation about God’s existence or non-existence into a cliché-shouting match. Our idea of a conversation about atheism is quoting “The fool has said in his heart ‘There is no God,'” somehow forgetting that the atheist with whom he is disagreeing has no reason to accept that verse as God’s word because the atheist doesn’t believe God even exists to have written it!

The Newsboys used to be good. Well, good with aliteration and catchy phrases and tunes that stuck in your head. They can do better. Christianity can do better. And I won’t even comment on the biblical veracity of the idea that Jesus lives inside of us, or the silliness thinking that telling someone that “I know Jesus lives because he lives inside my heart” will convince them of anything.

I can’t just leave you depressed, though. Some good has come out of Christian music lately. Like Jason Gray’s album “Everything Sad is Coming Untrue.” The album title comes from this scene from Lord of the Rings, which automatically makes it better.

Samwise thinks that Gandalf has died, but when Gandalf appears before Samwise’s bed and Samwise finally awakens, Gandalf asks,

“Well, Master Samwise, how do you feel?”

But Sam lay back, and stared with open mouth, and for a moment, between bewilderment and great joy, he could not answer. At last he gasped: “Gandalf! I thought you were dead! But then I thought I was dead myself. Is everything sad going to come untrue? What’s happened to the world?”

Jason Gray, in the song of the album, asks

Broken hearts are being unbroken
Bitter words are being unspoken
The curse undone, the veil is parted
The garden gate will be left unguarded.

“Everything Sad is Coming Untrue” shows us what was always there but we never saw. It tilts the frame so we see things anew. It puts words to our hearts’ deepest dreams, longings, and fears. It shows us things we’ve seen a million times in a way we’ve never seen them before, and it shows us things we never imagined could be true that are. It provokes us, pushes us to see the world in a different way. It lets us see the world through the soul of another.

Also: What news sources were the newsboys getting their articles from? I’ve never seen such headlines!

Edit August 9, 2012: Christopher Rodkey wrote his essay as a student at St. Vincent College in 1999, not a professor as was stated previously. He is now the Reverend Doctor Christopher Rodkey and is currently the pastor at Zion Goshert’s United Church of Christ in Lebanon, PA. He now teaches part-time at a college and a seminary. For more about Rev. Dr. Rodkey, please see Zion Goshert’s web site. And thank you, sir, for your correction.

3 thoughts on “Newsboys Tell Nietzsche that God’s Not Dead, Add Nothing To The Conversation”