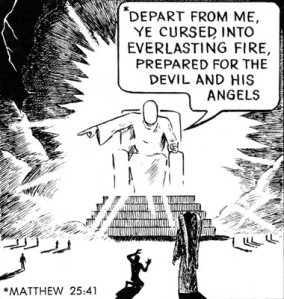 A couple of years ago, when I was in the thick of the Love Wins debate (the one about Heaven, Hell, and the fate of every person who ever loved), whenever someone wanted to explain to me that yes, hell really was eternal, they pulled out their bright-yellow highlighters and dropped a few layers of glow over the words “eternal punishment” in that verse above. They explained to me that in the section above, “eternal punishment” referred to Hell. “There are some people,” I was told, “who Jesus clearly says are going to be in eternal torment.”

I wasn’t so sure then, and I’m still not so sure now.

As 99% of the internet knows, World Vision ignited an internet firestorm a last week. The huge Christian nonprofit said that they were dropping their policy against hiring LGBT people for something more nuanced. They decided that rather than them deciding who was married and who wasn’t, their hiring policy would reflect whether the couple was married in their church. They opted to step out of the debate, and to no longer be on a side on this issue.

My friend John Hawthorne explained it this way:

WorldVision acknowledged that as a parachurch organization, they worked with a variety of denominations. Three of those in particular (United Church of Christ, PCUSA, and Episcopalians) had acted within their denominational bodies to legitimize same-sex marriage. These two factors meant that it was only a matter of time until active and faithful church members, married within the church, might apply for a position at WV.

…Christians in that “small minority” of denominations… spent years in political and procedural turmoil wrestling with questions of responding to homosexuality, ordination, marriage, scripture, theology, and faithful witness[.] You don’t have to agree with their conclusion, but denying their efforts is not allowed. These are people of faith who have worked to be faithful to the Gospel as they understand it.

We always knew that the sides against same sex marriage and the sides for same sex marriage would never see eye-to-eye (fine, there’s room for both of us), but what we saw yesterday went one step further: it was declared that Evangelicals are not allowed to take a neutral position on the issue.

That’s the key. No more neutrality allowed. It was declared that hiring a married homosexual shall now be considered as equally egregious to officiating the wedding yourself.

That line didn’t need to be drawn and puts those seeking to be peacemakers on the outside of the margin– no longer evangelicals in good standing.

So let’s go back to the hell issue. If Matthew 25:46 is, as my fundamentalist and evangelical friends claim it is, a depiction of hell, then we should probably pay very close attention to what the folks who arrived there did to get there, rather than, as they often warn against, making things up. Here’s the context:

Then they also will answer, “Lord, when was it that we saw you hungry or thirsty or a stranger or naked or sick or in prison, and did not take care of you?”

That bit about eternal fire always seemed to make it into my discussions about hell, but the reason for it always managed to stay out.

This is the heresy of evangelicalism: it puts policy over people. In Jesus’ story, the king doesn’t ask for an explanation about why the goats (on the left) didn’t give him food, drink, or clothing, or why they didn’t visit him. He simply explains that whatever they did to the least of these, they did unto him. This is not the time for “But Jesus, the company that we were sending money to to take care of you wanted to let GAYS work for them! That compromised their ministry!” Jesus finishes his speech and they go off to eternal punishment. Both of which words, I still suspect, may be a mistranslation. And what would compromise their ministry would be if they refused to take care of children.

Let me be more clear: When evangelicals dropped child sponsorships when World Vision opted to hire (married) gays, if we fit that into the story of the sheep and the goats, Jesus says, “I was hungry and you stopped giving me food because the company that was acting as a mediator hired gays.”

That’s right. If you stopped your child sponsorship, it wasn’t just a child that you stopped feeding because World Vision hired gays. It. Was. Jesus.

You chose to starve Jesus through one of the least of these his brothers because the non-profit hired people that you were certain Jesus didn’t like. You did this even though Jesus himself said in Mark 9:40 that “Whoever is not against us is for us.”

Whatever their actual explanation, I have no doubt that World Vision reversed their decision because they, unlike their evil constituents who trample underfoot the fair name by which they are called, chose to give policy a backseat to taking care of children. To taking care of Jesus.

This is what it means to take the name of the Lord your God in vain: Saying, “I’m a Christian,” and then rejecting what Christ stood for – taking care of the most vulnerable.

And talk about witness. The world watched this wickedness happen in God’s name. I can guarantee that nobody who is not currently a Christian is thinking to themselves, “Dang, those Christians really stand up for Jesus.” They’re all thinking, “Those hypocrites. Who would be so evil as to hold a child for ransom so that the organization that protects them won’t hire people that they think are going to hell?!” This is going to push people away from God. (Oh wait. It’s already happening.)

If you dropped your sponsored child over World Vision’s decision to be neutral on this issue, you didn’t compromise your witness before the world. You burned your “witness” to the ground.

If you think that Matthew 25:46 is about hell, then the verses before are about hell, too. I don’t think that this passage is about that. But if it is, and if you stopped supporting Jesus through World Vision, it couldn’t be more clear that Jesus’ words to you on the last day will be

Disclaimer: I speak on this topic with hypocrisy, and with my foot firmly planted in my mouth. I don’t sponsor any kids through World Vision. Right now the only children I’m sponsoring are the children whose parents work for the companies to which I’m paying back my college loans.

4 thoughts on “Jesus to the Christians who stopped World Vision sponsorship over LGBT issue: Go to hell.”