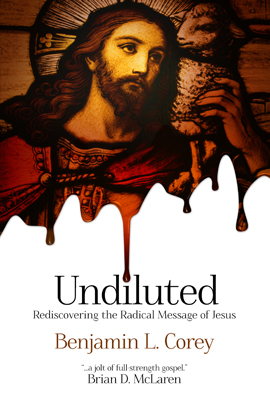 Famous (or soon-to-be-famous) Christians have come out with a whole slew of books about the “True Christian Faith” lately.

David Platt wrote Radical and Follow Me. Kyle Idleman wrote Not a Fan: Becoming a Completely Committed Follower of Jesus. Francis Chan wrote Multiply. John Piper’s Don’t Waste Your Life came out in 2003, and Kevin DeYoung recently put out The Good News We Almost Forgot and The Hole In Our Holiness. Alex and Brett Harris (siblings of Josh, of courtship fame) wrote a book called Do Hard Things, a phrase I think nicely sums up this whole category of books.

These books (and their readers) seem to share several common assumptions:

They also tend to tell readers to stop doing what they’re already doing and switch over to My One True Gospel That God Has Revealed To Me, which, ironically, always turns out to be exactly what we were doing before, only louder. And then my friend Ben Corey wrote a book called Undiluted: Rediscovering the Radical Message of Jesus. If I were judging by the title alone and wasn’t familiar with Ben’s blog at Formerly Fundie, I would’ve  expected just another book filled with sanctimonious bullshit “Be Radical By Doing What I Say Which Is What You Were Doing Before But Louder!” book that would get all my evangelical friends up on a spiritual high and suddenly feel like they’re real Christians now and finally understand the truth of what that means even though it’s the exact same regurgitated sanctimonious bullshit.

Undiluted is not the same regurgitated sanctimonious bullshit.

As I learned from the back cover and the book, Ben Corey has two graduate-level degrees in theology from Gordon Conwell and is working on a doctorate from Fuller. More importantly, he has a clue and a life that reflects that clue. I wish I had written Undiluted.

He starts by admitting that he was wrong. Very wrong. Which is always an excellent start. Too many Christian authors launch with an explanation that they knew the truth and just didn’t believe it enough, or they didn’t know enough of it. Corey opens with “I knew and was right, but what I knew was wrong.”

Growing up in conservative evangelicalism, I was gently led to believe that everyone other than ourselves watered-down the message fo Jesus. I remember as a child driving past other churches in the area and asking what made them different from us. When passing the Methodist and Congregational churches, I was told that they were simply “social clubs,” and when passing the local Assembly of God I was told that they were “crazy people.” A distorted expression of what it means to follow Jesus was always something they were doing–never something I or we were doing.

He just exposed every other book in this category.

He describes how all sorts of things like Republicanism, not smoking, and being pro-life have gotten mixed in with the gospel. Corey isn’t content to go after consumerism and greed and tell you to evangelize and give more to the missionaries like all the other books in this category. He has found the sacred cows so many of us Christians conflate with the gospel (or even being a radical Christian, and taken a grenade launcher to them.

All of this has happened by page 19.

Corey’s chapter titles all start with the word “Undiluted.” They end with words like “Reorientation, Community, Inclusion, Change, Tension, Difficulty (see? It’s difficult. Just not in the way those other authors think it is), Justice, Love, Forgiveness, Loyalty, Story, and Identity.

Many of those words, like “Inclusion,” Tension,” and “Justice” seem out of place in a Christian book titled Undiluted. And those words you recognize from all the other Christian self-help-save-the-world-and-be-an-awesomely-radical-Jesus-follower books? They mean something very different when Corey uses them.

Gosh. That sounded so much like every other Christian book in this genre ever, but I promise it’s nothing like them.

Inclusion means including outsiders – the wrong people. He’s not talking about including them to get them saved, either.

“Undiluted Change.” Yes, Ben, we all know that we’re supposed to change and be more the way we know we’re supposed to be. But no. Change for Benjamin L. Corey means we realize that we, not them, are the problem. Not in a way that makes us the problem because they are and we’re not doing enough to change them, but in a the-buck-stops-with-us-because-we’re-actually-what’s-wrong-with-the-world kind of way that Chesterton would be proud of.

And of course there’s my all-time favorite: Undiluted Tension.

Christians (at least the ones I grew up around) hate tension. We want our answers quick and easy. We want to know what the unpardonable sin is and how God can save some and damn others and still be good, and goddammit we want it to fit on a bumper sticker. Tension is about not knowing the answers. (Is this starting to seem like a theme to anybody?)

“Undiluted Difficulty,” of course, seems like the perfect place for Corey to join the genre. The Christian life is hard. People persecute you by trying to make your business pay for their birth control or electing Democrats who don’t want God in the Pledge of Allegiance to America. (I don’t want God there either, thank you very much). But no. Corey’s talking about actual hardship here – hardship brought on when doing what you think is right has unintended consequences, not hardship brought on by you thinking that God wants you to do something obviously and utterly stupid for no reason. That’s on you.

Justice, of course, means that God is perfectly just to damn everybody to hell and hadn’t you better shape up?

Oh wait. That’s not what it is at all (in the book, or, in my opinion, in Christianity). For Corey, Justice is about the sorts of things the Bible says.

I discovered justice not as God throwing a violent tantrum, but God’s passion for restoration, liberation, healing, and wholeness.

When Ben Corey talks about Undiluted Love, he’s not talking about the warm fuzzies – but he’s also not talking about the meanness that often gets switched in for love and labelled “tough love.” He’s talking about an altogether different form of tough love, the kind with the guts to turn the other cheek, go the extra mile for a soldier in the army of the nation that’s oppressing yours, and to love your enemies – your actual enemies, not just your mother in law. (Unrelated: What’s wrong with mothers-in-law? I really like mine.)

When Ben Corey write’s about Christianity, it doesn’t look like the Frankenstianity that Francis Chan’s Christianity looks like, the kind where you’re a hamster on a wheel trying to please a God Chan claimed a few chapters earlier was already pleased with you. (I’m referring here to Crazy Love, of course).

It doesn’t look anything like Christiamericanity, the fusion of American nationalism and Christianity, which could also be called Frankenstianity.

It doesn’t look like the prosperity gospel, but Ben doesn’t protesteth too loudly against it. I get the feeling that he trusts his audience enough to believe they’ll figure it out for themselves after the chapters about “Undiluted Difficulty.”

And it doesn’t even look like the gospel of the Gospel Coalition or fundamentalism whereby folk just need to git saved.

Buy the book. Better yet, buy two – one for yourself, and one for your evangelical friend who just wants to be closer to Jesus but wasn’t expecting this. Oh, and when you buy the book, use my link to support your other favorite progressive Christian blogger 🙂

A few months ago, Ben put out a link on his facebook feed asking blogger friends if they wanted a free copy of his book in exchange for a review. I sent him my address, and he sent me a book. I was under no obligation to write a positive review. I did it because I wanted to and because it’s a great book.

3 thoughts on “A Concentrated Review of Undiluted”