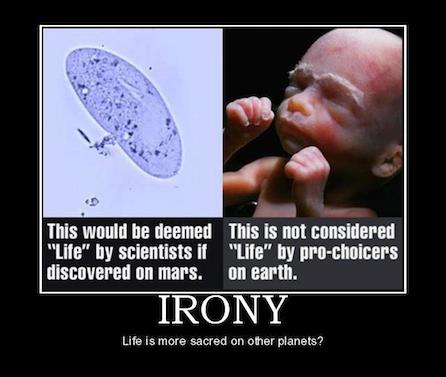 I saw some protesters outside the local Planned Parenthood today. They were holding signs to vote for Colorado Amendment 67 and something about murder.

Amendment 68 would make anything past conception a person under Colorado law and make killing that “person” illegal, and punishable by the same consequences as killing any other person. It’s every conservative Christian’s wet dream come true.

Before you jump to the comments and judge me and start quoting the Bible, please understand why I am going to vote no. It’s really important. Comments written by persons who have obviously not read this post in its entirety will be deleted post-haste.

It starts with the Bible, which I must note is by no means clear on most issues, but especially this one.

In spite of perpetually running arguments to the contrary, the Bible really only talks about killing unborn children once. Because I like you, I’ve quoted that passage from the NRSV.

When people who are fighting injure a pregnant woman so that there is a miscarriage, and yet no further harm follows, the one responsible shall be fined what the woman’s husband demands, paying as much as the judges determine. If any harm follows, then you shall give life for life, eye for eye, tooth for tooth, hand for hand, foot for foot, burn for burn, wound for wound, stripe for stripe. -Exodus 21:22-24

Here’s the problem with the current evangelical and fundamentalist formulation: As at least one someone quite intelligent has pointed out, the person responsible for the death of an unborn child is not considered a murderer in sacred scripture. I have a pet peeve: The conservative meme that says a few cells are considered life on mars, but not on earth. (Not the one above this text). This is an obvious false equivocation. Nobody is arguing that a fertilized egg isn’t life. The argument is over whether it’s a person.

Philosophers have this thing called the Bald Man paradox. Basically, a man with a full head of hair isn’t bald. If you take one hair away, he’s still not bald. Same with the next one. But eventually, if you take away enough, the man is considered bald, even if he has some hairs left. Which hair, taken away, makes the man bald?

The same applies to an unborn child. When it is born, it is considered a human being, a person. But when does it become a person? Are the single egg and single sperm a person? Do they become a person when they join together? Or when they implant? When they fit on the head of a pin, perhaps? Maybe when the cells divide and divide and start to grow a brain? When they look like a child? And why your particular, seemingly-arbitrary, milestone?

No matter how many times we quote Psalm 139 or any of those passages about God making us in our mothers’ womb, as we look back, that was where we started. But was that “us”? Perhaps it was the beginning of our body, but was it truly us?

The debate, then, is not over whether life begins at conception, but whether personhood begins at conception. I know my Catholic brothers and sisters will disagree, but I think a few clumps of DNA joined together hardly qualify as a person. When I scratch my arm, I scrape off more cells of “life” than the Plan B pill kills. Should we have laws against scratching?

In Job 3:16, Job is despairing so much of life that he wishes he hadn’t been born. Are there situations where not giving birth may be the better option?

So, for me (though perhaps not for you), a few cells at conception doth not a human being make. I’m still squeamish about saying “It’s perfectly fine to kill it off no matter what,” but I don’t want to say “There are no circumstances in which it is unacceptable.”

In 2013, the Washington Times reported on a study of late-term abortions. Some salient facts:

In the Hobby Lobby debacle, hyper-conservatives fight against birth control is ironically causing abortions. In the same way, their fight against abortions in any term are leading to what they hate most: late-term abortions.

In his exquisite piece “10 Things You Can’t Do and Still Call Yourself ‘Pro-Life,’” my friend Ben Corey begins with this item at #10:

You cannot support unrestricted, elective abortions, after the age of viability.

The rest of the items on his list are mostly liberal in nature, like a livable minimum wage, economic policy, immigration, universal healthcare, gun control, and war. Check it out at the link above, ’cause it’s really good, yo.

Basically, most people who are pro-life aren’t really pro-life; they’re just pro-birth. After you get born, it’s up to you to take care of yourself. Which is why conservative Christians are perfectly happy to ban abortion under most, if not all, circumstances, and let the desperate woman who gets an illegal back-alley coat hanger abortion be damned. It’s as if conservative Christians’ loud care for human life begins at conception and ends shortly after birth.*

* I should note that many conservative Christians are almost certainly very caring and loving and decent people, and many would take great care of any human being who came across their path in need. In policy, however, I think Ben’s blog post (which you should definitely read) is disturbingly dead-on.

I’m grateful for the collective wisdom of my adopted denomination, the Presbyterian Church (USA) and what they’ve carefully and prayerfully written about the termination of problem pregnancies. I think it is well-written, and I have adopted it as my position as well, for what it’s worth.

When an individual woman faces the decision whether to terminate a pregnancy, the issue is intensely personal, and may manifest itself in ways that do not reflect public rhetoric, or do not fit neatly into medical, legal, or policy guidelines. Humans are empowered by the spirit prayerfully to make significant moral choices, including the choice to continue or end a pregnancy. Human choices should not be made in a moral vacuum, but must be based on Scripture, faith, and Christian ethics. For any choice, we are accountable to God; however, even when we err, God offers to forgive us.

Problem pregnancies are the result of, and influenced by, so many complicated and insolvable circumstances that we have neither the wisdom nor the authority to address or decide each situation.

We affirm the ability and responsibility of women, guided by the Scriptures and the Holy Spirit, in the context of their communities of faith, to make good moral choices in regard to problem pregnancies.

The Christian community must be concerned about and address the circumstances that bring a woman to consider abortion as the best available option. Poverty, unjust societal realities, sexism, racism, and inadequate supportive relationships may render a woman virtually powerless to choose freely.

I could not agree more. Read more here.

And that’s why I, a Christian, will vote “no” on Colorado Amendment 67.

It’s also why I wanted to hold up a few signs of my own beside the (mostly Catholic) protesters.

I’m sorry you’re in a position that forces you to make such a difficult decision, and that my Christian siblings are here making it more difficult.

Birth control is cheaper than an abortion. Get it here! Or from your doctor.

Jesus loves you no matter what you do.

Maybe someday I will.

EDIT: My wife notes that I should mention my preference for abortion is that of former first lady Hilary Clinton: “Safe, legal, and RARE.” More birth control. Better sex ed. I advocate normal birth control, not abortion as a form of birth control. In any situation, I would prefer the woman be on birth control to prevent abortions in the first place – something, as I mentioned earlier, groups such as Hobby Lobby oppose, and God knows why.

56 thoughts on “Is Abortion Murder? The Bible Says No (Kinda)”