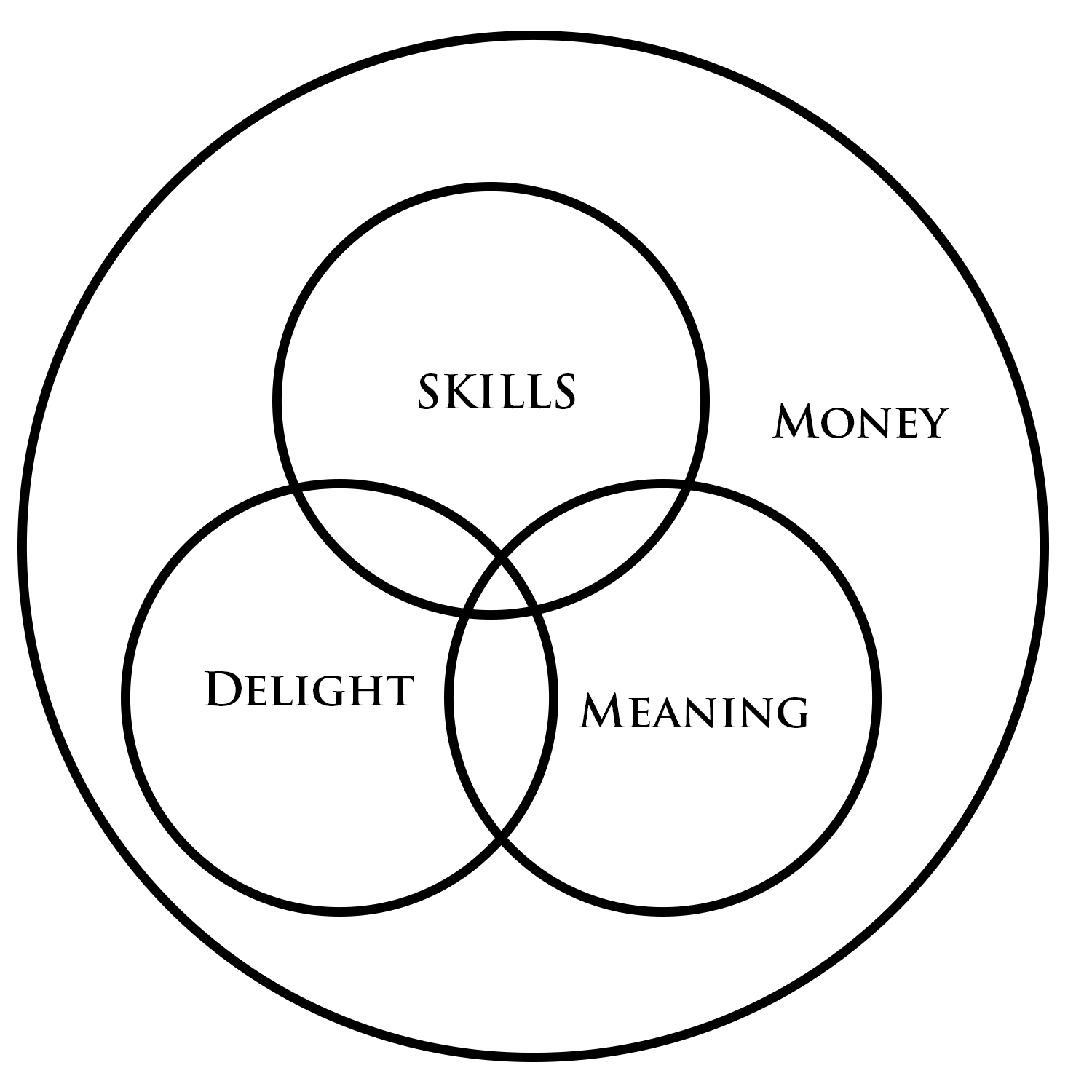 1. It’s not just skills and enjoyment. You also need money and meaning.
I got a nifty book by Max Lucado a few years back called Cure for the Common Life: Living in Your Sweet Spot

. It was a lovely enough book, and it had much useful information. Max said the “sweet spot,” the part of our lives from which we should live, is that place where what we enjoy doing and what we’re good at come together.

This is all lovely, but from a practical perspective, very few of us are independently wealthy and able to do whatever it is that we most deeply enjoy doing and what we are good at. We also need to get paid. Which seems obvious enough.

But what I’ve discovered along the way is that we also need meaning in our work. A lack of meaning sabotaged me in many jobs in which I did work that I was good at and took some enjoyment in doing. Money and skill only got me so far; when the enjoyment faded, with no sense of meaning, I dropped out of any number of jobs because I didn’t feel that I was doing something useful.

Meaning, of course, isn’t purely the sense that what I am doing matters and is good for the world around me. My maternal grandfather once told me how, in various repetitive boring jobs where he had skill but no enjoyment, money became the meaning: He considered his work to be paying for things. One block of time paid the electric bill, another was shoes for his children. His work was meaningful not because of its own worth, but rather because of what he could buy with the money he was earning. That sense of meaning kept him going, and the knowledge that my work is helping pay the rent and other bills has kept me going as well in some recent work that has proven particularly dull. Meaning and delight without skill will get you fired.

You can only stand delight and skill without meaning for so long.

Meaning and skill without delight is a sure recipe for drudgery.

And all of this without a paycheck is a recipe for happy homelessness.

2. There is more than one option.
When one reads books about calling and purpose, both often appear in the singular, as though for each of us there is but one broad calling and purpose. This is not the case. As some have written that there may be many people who would be a good fit for each of us as spouses, there may be multiple options for each of us in the way of calling. For example, at the moment I am pursuing two paths. One is at my favorite camp, and the other route winds through a seminary (which one remains to be seen, but I have three applications in).

I finally feel that I have sufficient experience to be aware of where some of my skills lie, and I feel that they lie in areas conducive to either path. I have noticed my delight also seems to be in those areas as well, and not coincidentally, I find a sense of meaning and purpose on both paths. Both will pay me as well, though returns on the seminary route will take longer.

3. Skill requires training.
Child prodigies notwithstanding, most of us aren’t born with an innate ability to do things.

My younger brother has had years of practice playing piano, though his skills have probably stemmed from his practice, which has stemmed from his delight. My writing ability, such as it is, winds back through my delight at other folks enjoying things I have written, through practice, and through intense training from my dad.

Last year, I launched into a career as a 6th-grade English teacher with no educational training or background except camp, which is a different animal altogether. I taught mostly kids from low-income families. I had a strong sense of meaning and purpose, and the pay was the best I’d had in my life, but with no skills, no practice, and no training, mixed in with a tough crowd and a negative experience with the school administration, my enjoyment departed quickly, and within six months, so did I.

4. Know the field before you take the leap.
When I began teaching, I didn’t really understand what I would be doing. I had a vague and fuzzy notion that I would be inspiring students, but I had no idea that “inspiring students” required much more than a tight grip on the English language and a caring and charismatic personality. It requires years of training, lots of practice, good classroom management theory, an unbelievable amount of preparation, and even then a disturbing number of teachers leave the field. I never expected to become a statistic, but here I am. I think there’s a verse somewhere about checking your bank account and running an expense report before building a tower. (Luke 14:28)

The same thing happened when I went to school for film. It seemed all lovely and wonderful, but I realized I didn’t enjoy most of the work most of the time. It was okay some of the time and awful much of the time.

5. God will not hand you your calling on a platter.
My background primed me to assume God’s call was just something magical that happened, but I’ve come to think that in some ways, the calling requires work, rational thought, and maybe even prayer.

6. Full-time professional Ministry doesn’t necessarily require an audible calling.
In a few of my seminary applications, I told the story of sitting in church hearing the pastor talk about when he was ten years old and felt God calling him into ministry. I remember thinking, “Man, that’d be cool,” but feeling nothing. I think we have to work for our calling. The Presbyterian Church (USA) calls this process “discernment,” as in “discerning your calling.”

There are lots of horrible reasons for doing “The Lord’s Work,” among which are a desire for prestige or power and the like. I’m hopeful that my reasons are well-thought-out and soaked in sufficient prayer.

7. Purpose takes time.
People have a silly habit of asking small children what they want to be when they grow up, and intending it as a question about career. (When I grow up, I want to be kind to everybody.) We expect people to know the answers by the time they are in high school, or in college, or out of college, but for many of us, this will not be the case. For many of us, discerning our calling takes time. Many of us pursue what we think we want to do when we grow up, but then find it unfulfilling or meaningless-feeling, or simply learn that we suck at it.

One thought on “7 Things I’ve Learned About Calling & Purpose”