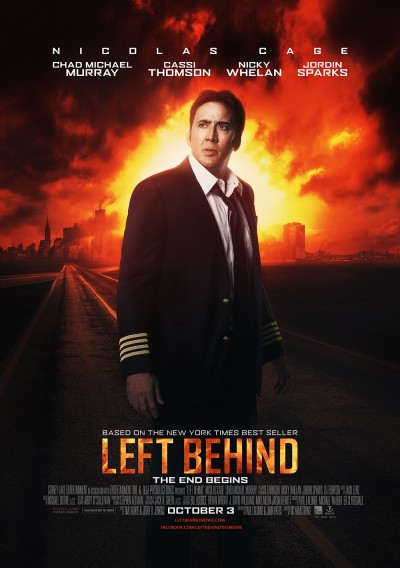 How would Left Behind look if the filmmakers treated it the same way as they had treated 2012, The Road, and Independence Day?

The new Left Behind stars Nicolas Cage and was directed by stunt coordinator and second unit director Vic Armstrong. I read an article a while ago that said Armstrong read the script and thought it was a neat idea, so I assumed he was going to take it seriously but didn’t actually believe in it. I decided it would be an excellent film and I had to see it.

Subsequent interviews have given me reason to fear Armstrong, and almost as bad, possibly Cage, actually believes that rubbish N.T. Wright calls “pseudotheological fiction.” One of the two screenwriters, Paul LaLonde, helped found Cloud 10 Pictures. The other, John Patus, helped with both sequels to the original Left Behind movie. Willie Robertson of Duck Dynasty fame has an Executive Producer credit. My hope that LB14 might be fun faded.

But really, how would a secular filmmaker make Left Behind fun and, more importantly, not have characters screaming “WHY DIDN’T WE ACCEPT JESUS? WHY???” all throughout? I spent way too much time thinking about it, and I have a few ideas.

In Left Behind, people vanish with no explanation, causing car accidents and plane crashes. Obviously, this must be the work of some dark, malevolent force – one that takes people from their loved ones instantly and with violent and harmful consequences to the world.

Even if the people who were taken were immediately placed somewhere warm and wonderful – heaven, even – there would be no way for those Left Behind to know this. Of course, some pastors who once found the theory ridiculous, or who knew it but didn’t believe it and treated it as a completely ridiculous and possibly backwards notion, might begin to give it credibility.

So we have an external force – a primeval-seeming deity – who takes those who believe in him and leaves behind those who don’t to get in car and plane accidents. According to the plot of the books and movies, this is just the beginning of what happens to those who don’t believe over the next seven years (which is just a teaser trailer for what will happen to them after those seven years!).

How can those who don’t believe escape this wrathful deity? It’s easyish: believe and knuckle under. The choice is simple: meet the super-powerful force’s demands, or suffer the consequences.

Enter Nicolae Carpathia. Carpathia represents the forces of opposition to this crazy deity. He’s a little egocentric and tends to think of himself as a god to be worshiped. He starts out by doing what some Occupy Wall Street protesters probably wish they could do: he guns down two lying scheming (assassinating) bank owners who are above the law and convinces the world they shot each other.

But whatever. He’s into world peace. He’s well-meaning in his attempts to create a one-world religion and one-world currency, if a little misguided, but is surprisingly successful. All but a few psychopathic worshipers of the creepy deity think Carpathia is the bee’s knees and the cat’s pajamas. Just to rub it in the deity’s face, Carpathia takes 6-6-6, multiplies the 6’s by each other, and slaps 216 on everything.

The world follows Carpathia, but the self-absorbed monster-god who is out for glory attacks everything he does and everyone who is committed to peace and love and stuff. Boils, creepy-looking locusts that give you six months worth of pain per sting, and an earthquake thwart Carpathia and his band of do-mostly-gooders at every turn. One time Carpathia dies because ten of his closest followers betray him, but he comes back to life. Kinda like Jesus.

In the end, of course, the monster-god wins. Carpathia and those who believed in him never had a chance. It’s actually kind of sad.

The moral of the story, of course, is that you can’t win against a malevolent deity.

There is nothing Christian about Left Behind, unless you count lots of quotes from the Bible and repetitions of the words “God” and “Jesus.” Jesus resists evil powers, but in Left Behind, Jesus is recast as the evil power and Carpathia is (sort of) the resistance. Unlike the God who is Jesus, LB14‘s god doesn’t give a damn about the world and indiscriminately rips people out of their cars and cockpits with no regard for the consequences of his actions on the unredeemed around them. This does not sound like a God who died for his enemies. On the sliding scale of good to evil, this god’s activities definitely cross the moral event horizon.

Will I watch Left Behind 2014? Probably. Is the story any good? Probably not.

7 thoughts on “You’ve Been Watching Left Behind Wrong: Nicolae Carpathia is the Hero”