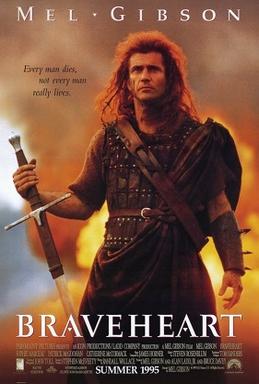 Edit June 27, 2017: This is not all of Christianity, and honestly probably isn’t even most of Christianity. But it does apply to a certain subsection. Please read the rest of this post accordingly.

Thesis: Christianity has a love affair with William Wallace, and that affair is leading us to cheat on Jesus and become dissatisfied.

I’ve read far too many books where William Wallace is extolled as a great example for Christians. He’s set up as a sort of allegory for how Christian life works. Two examples:

In God’s Gift to Women, Ludy has a section titled “My Introduction to Ultimate Manhood,” and under this is, of course, a tribute to William Wallace. Here’s an excerpt:

…as I read the book The Scottish Chiefs, I felt my blood stir. I was ready for battle. My hero, William Wallace, had just died a horrible death at the hands of the English, and his example of courage and daring burned within my soul. I wanted to follow him. I wanted to fight for him. I wanted to die alongside him. And as Sir Robert the Bruce called out for all Scottish Patriots to join him in following Sir William Wallace’s example, I found myself standing up and shouting, “Count me in!”

And lest we think this love affair has passed, he writes in the next paragraph,

On the wall next to my computer I have pinned up a scrap of paper to daily remind me of William Wallace’s amazing, self-sacrificial example of the kind of man I want to become. (Pages 27-28, emphasis mine)

In the excerpt above, Ludy refers to William Wallace’s example as self-sacrificial, alluding to Jesus self-sacrifice, but it would be difficult for the two to be more unalike. Jesus was killed because he wouldn’t stop loving. William Wallace was killed because he wouldn’t stop killing, his longing for freedom for his people notwithstanding. Jesus saves his friends and his enemies through love. Wallace saves his friends by killing his enemies and then becoming a martyr for his violence. Jesus teaches forgiveness while Wallace kills for vengeance. In essence, Wallace embodies everything we like about Jesus (his bravery and self-sacrifice) without the things we dislike (Jesus telling us to love and forgive our enemies instead of killing them).

Case Study #2: John Eldredge
I don’t know if Eric Ludy ever read John Eldredge, but I suspect their love affairs with Wallace happened independently. Eldridge, in his inspiring and probably-helpful book Wild at Heart says, in one of at least ten Wallace references:

Most of the men I know are trying hard not to become like their fathers. But who does that leave them to follow after? From whom will they derive their sense of strength?

Maybe it would be better to turn our search to the headwaters, to that mighty root from which these branches grow. Who is this One we allegedly come from, whose image every man bears? What is he like? …Be honest now – what is your image of Jesus as a man? ‘Isn’t he sort of meek and mild?’ a friend remarked. ‘I mean, the pictures I have of him show a gentle guy with children all around. Kind of like Mother Teresa.’ Yes, those pictures I’ve seen myself in many churches… Telling me to be like him feels like telling me to go limp and passive. Be nice. Be swell. Be like Mother Teresa.

I’d much rather be told to be like William Wallace.
(Page 25, bolds mine).

I bet you would, John.

The next section is titled BRAVEHEART INDEED and summarizes the plot of Braveheart. Wallace is lauded for picking a fight with the evil English tyrants – and compared to Jesus for it! because Jesus picked fights with the pharisees. Eldredge doesn’t seem interested in the minor detail that Jesus never killed anyone with whom he picked a fight. And Eldredge regularly mentions Wallace in his other books.

Our Most Deeply-Held Belief
I suspect that our love affair with William Wallace comes from a much deeper disease:  we claim to believe in Jesus, but more deeply than Jesus, we believe in the Myth of Redemptive Violence, the idea that we’re good and The Other is bad, and the only way to stop them from being bad is to kill or hurt them. We like Braveheart because it tells us what we already believe, and we distrust Jesus because loving our enemies is counterintuitive.

We live in a media culture that is supersaturated with violence. We’ve infused Christianity with fighting language to try to make things more interesting, because we’ve gotten so high on violence that the Kingdom of God seems, well, boring.

For this reason, we frequently use the war metaphor for Christianity. Spiritual warfare. The full armor of God. We love King David’s epic battles. The culture wars. Books like Every Man’s Battle, Wild at Heart, Battlefield of the Mind. My wife and I were skimming a devotional for couples that, for several days, read more like an exaltation of soldiers on D-day!

Because we believe the Myth of Redemptive Violence, when Christian authors tell us that Christianity is a battle, we believe them. We like battles. They’re exciting – and righteous – because they involve destroying our enemies. Healing the sick, helping those in need, and visiting those in prison all seem very humdrum compared to fighting every man’s battle against lust, and when it comes down to it, looking away from women who aren’t our wives seems very humdrum compared to fighting an actual battle.

Jesus and the War Metaphor
Jesus taught us to love our enemies. He did indeed say “I saw Satan falling like lightning from heaven,” but under what circumstances? The disciples had gone out and “fought the good fight of faith: they had followed Jesus’ instructions to “Heal the sick who are there and tell them, ‘The kingdom of God has come near to you,'” and even the demons were subject to the disciples in Jesus’ name.

The kingdom of God has come near to you.

Jesus was the only one who saw Satan falling like lightning. The disciples only saw healing and demons leaving. Which is exciting, but not exciting like war is. Which brings us to Christianity and violent movies. We can’t watch movies with sex scenes in them, because that’s sinful. But we watch movies with violence in them all the time, because we have bought into the Myth of Redemptive Violence and we believe that more deeply than we believe the words of Christ.

The Christian life is not a battle. It’s just not. Battles are exciting and terrifying and such an incredible adrenaline rush that when marines come home, they get depressed because everyday life is so gosh-darn boring. Going forward and accepting Jesus can be an adrenaline rush, but it passes. Telling someone about Jesus can be exciting too, but it’s not a battle. The so-called battle happens while you’re deciding if it’s a good idea.

The war metaphor isn’t helping. It’s basically a bait-and-switch where we think we’re getting something that we find exciting, but it turns out to be very daily. So we feel like we’re spinning our tires if the Christian life isn’t exciting and full of adventure. Well, news flash: It often isn’t. But sometimes it is. But not like a war. More like a mustard seed. More like the kingdom coming.

Final note: Eric Ludy recently (2008 is recent, right?) published a book called, I kid you not, The Bravehearted Gospel: The Truth is Worth Fighting for.