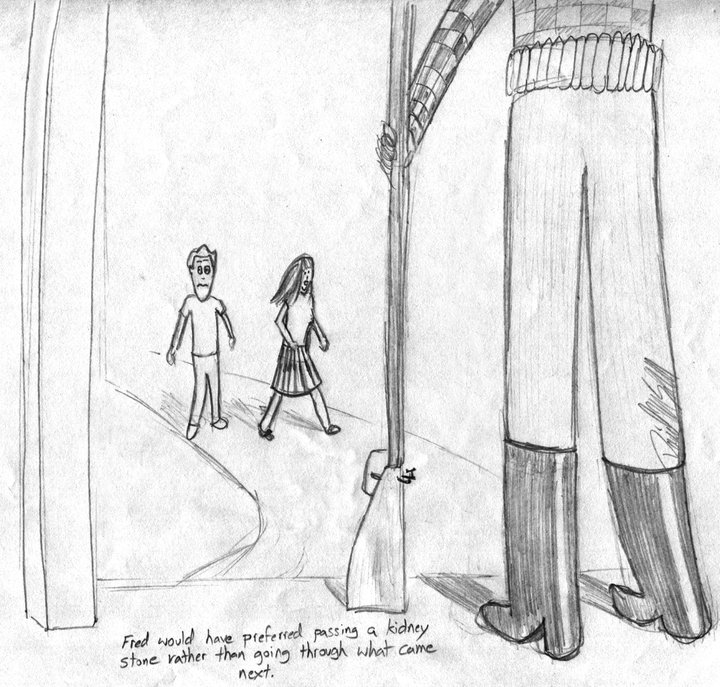 There’s a mythology surrounding dads and daughters that goes something like this:

All boys are evil. They only want one thing. For this reason, all fathers must own shotguns (or firearms of some kind, but preferably shotguns) to protect their daughters against those evil boys who only want to get into their pants.

In the mythos, the father is usually sitting on the front porch cleaning his firearm when the boy arrives to pick up the girl. There is a one-sided negotiation over how late the two will stay out: the dad explains when he will have her back by, and then he changes his mind and decides that they should return sooner.

What’s most troubling about this mythos is that it has been largely adopted by Christian men; evangelical men in particular. This is troubling on a number of levels.

The first (and most obvious) level is the implication of violence. I’ve been spoken to by a man with a shotgun before, and it was a rather scarring experience. He never pointed it at me, but it was unpleasant nonetheless. It disturbs me that this is one of the many times during which evangelicals love the idea of guns.

There are a disturbing number of parallels between evangelical men and Jayne Cobb from the TV show Firefly and film Serenity who says, “I’ll kill a man in a fair fight… or if I think he’s gonna start a fair fight. Or if he bothers me. Or if there’s a woman. Or if I’m gettin’ paid – mostly only when I’m gettin’ paid!” Evangelicals (some of them) tend to love their guns as much as Jayne. And he named his.

In addition, it’s a double standard. Girls’ virginity is sacred, but boys’ virginity is functionally irrelevant. No father or mother ever meets a female date with a shotgun warning the girl not to take advantage of their son. Certainly it could be argued that boys are more likely to take advantage of girls, or that boys are stronger, but you’ve got to understand that not all boys are like that. This kind of stupid assumption is a little like if you saw a young black man walking down the street with skittles and wearing a hoodie, decided he was up to no good, and then shot him. I’m not sure why that sounds familiar…

I know the lines in the myth because they’ve been recited to me.

Mark Driscoll once explained in a sermon that every dad has a duty to his daughter – to let her know that all boys are evil. He said that there were two things that every Christian father needed to let a young man coming to call on his daughter know: “We love Jesus, and we know how to hide a body.”

I’m sorry… WHAT?! In what kind of psychotic Christianity do Christian dads need to know how to hide bodies?

That line about boys only wanting one thing? My dad said it all the time. He said he knew that it was true because he was a young man once himself. If you’re not a sex-fueled robot, It’s enough to make you bang your head against a table or a wall, whichever is closer. (Read the article in the link. Micah J. Murray is a beautiful man.)

I admit that my father didn’t own a shotgun, but we had very candid conversations about meeting young men at the door with the sledgehammer we used to cut firewood. I was quite disappointed the first time a young man (from a different faith!) called to talk to my sister: my dad just handed her the phone!

I’m pretty confident that my former girlfriend’s dad had a shotgun, or a firearm of some kind. He once accused me of being “like a dog in heat” – in spite of the fact that I had never touched his daughter. Wait. Our hands might’ve touched once or twice when I handed her something. His dogs must’ve behaved very differently from any I’ve ever seen when they were in heat, that’s all I can say.

Being forced to interact with that man revealed to me the great truth that in large part, we behave the way we believe people expect us to behave. I don’t mean the way that we do what people tell us they expect from us; we do what they actually expect us to do. For example: He said that he expected me to only talk to her for fifteen minutes per night. What he actually expected was that I would be a disobedient shmuck who talked more often and snuck around. I lived up to his expectations. And where the hell did we get this stupid idea that you set boundaries on the boy? Keep your own kids under control, jerk. (Sorry, a bit of excess rage is still under there apparently.)

Then I met the man who was to become my father-in-law. Skittish doesn’t begin to describe my condition. Gracious doesn’t begin to describe his. He never hinted that my motives might be anything less than absolutely pure. He never warned my bride-to-be that boys only wanted one thing. In short, he respected me. He lived like someone with no reason to believe that I would be anything less than honorable and completely trustworthy. And I lived up to his expectations.

I don’t know if he owns a shotgun, or a firearm of any kind. His younger brother did, and I had been warned that he was very protective of his neices, but when I finally got around to going to visit, I never even got to see the long-dreaded shotgun. He showed me how to put kabobs on a grill, and while he was teaching me, he decided that he liked me. That was it.

I should mention that I was a bit disappointed in the first meeting with her parents when I asked permission to date the woman who is now my wife. I half-expected a fierce grilling. A long meeting with threats of violence if I ever hurt her. But I never got them – and a good thing too, because I was still ready to make a run for it in the event that her family turned out to be psycho. The closest I got to a grilling? Her parents took us to Red Robin to talk.

Fear is a horrible motivator, kids. Even if you can get the person you’re threatening to do what you want, you can never make them like you.

And maybe that’s where it comes from. Some people see God as this big man in the sky who threatens people with hell to get them to do the right thing and, as a result, treat others in the same way. Somehow, I don’t think my wife’s dad sees God that way. And for that, I am forever grateful.

Anne Lamott once said, “You own everything that happened to you. Tell your stories. If people wanted you to write warmly about them, they should have behaved better.”