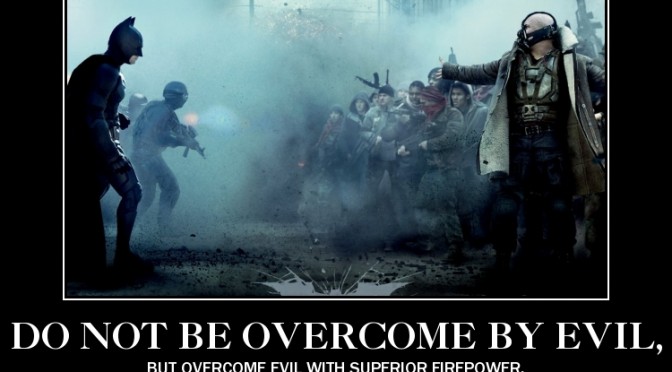 *** SPOILER ALERT ****
There be spoilers below. If ya don’t want ’em, don’t read it. Still, I whited out as many spoilers as I could. Select the invisible text to see the missing words.

Dark Knight Rises was pretty epic, as movies go. I left the theater with dozens of thoughts tumbling around my mind, centrally this one: Could Bane and Natalia have been saved?

I pondered it over and over again. Where did things go wrong for Bane and Natalia? What was broken in them? How could it have been healed in a non-violent way? What could the common citizens of Gotham have done to show the evil Bane that they were now as he once was? If they had done it, would he have been saved? What was it that made Bruce Wayne a vigilante for “true justice?” Would Bruce’s story play out that way in the real world?

The Myth of Redemptive Violence has been around for a very, very long time. At its core is the idea that evil is located somewhere else, evildoers cannot be redeemed, and they must be destroyed / stopped at any cost. The myth itself is that evil looks like it reigns a while, but then at the end (spoiler alert for almost every movie ever) our brave single hero (or small team of heroes) digs deep within and finds, either within or without, the power to be mightier than those evildoers bent on the destruction of the world. Basically, good overcomes evil with Superior Firepower.

And that (spoilers) is exactly what happens in Dark Knight Rises.

What’s wrong with that, you ask? Well, it depends on your worldview. As Christians, we follow a guy who defeated evil with good, a guy who, instead of killing his enemies, died for them. A guy who destroyed evil by letting evil crush him. We do not overcome by Superior Firepower, but by the blood of the lamb and the word of our testimony.

Dark Knight Rises is a pretty legit action movie, with lots of crunchiness going on, including a barely-veiled reference to the Patriot Act and lots to think about regarding moving on past tragedy, as well as a fascinating perspective on what will make us happy / save us (true love / getting married). It’s optimistic and idealistic to the end… but I don’t think it goes far enough in its idealism.

Maybe we’re prone to believe this myth because this is the myth we’ve seen seem to play out for so long, and it’s worked out fantastically for us. Maybe it’s because having superior firepower is the only thing we’ve ever seen “defeat” evil. And maybe that’s because we live in America, where we’ve been “overcoming evil with Superior Firepower” since day one. Maybe if we lived under an oppressive system, we’d see things diferently.

Or maybe we’d just hang on to our Myth of Redemptive Violence and pray for Superior Firepower.