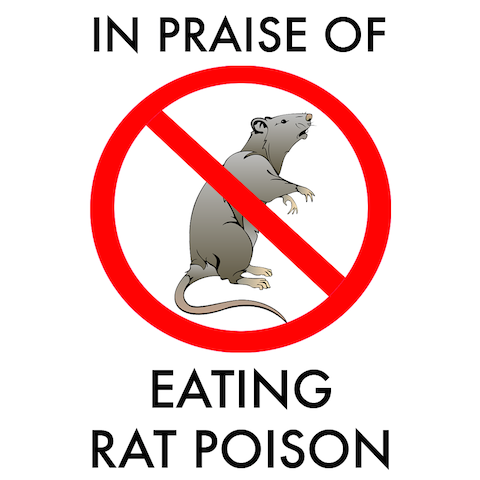 When I was maybe 3 or so, I ate rat poison. Maybe. My parents never knew for sure whether I’d eaten it or not, but they took me to the doctor just in case and I had to take ipecac to vomit up whatever I’d eaten (or not eaten) just in case. Spoiler: I didn’t die. But this post isn’t about that kind of rat poison.

In church, at VBS and Teen Fest (yes, that was a thing), and even at home, I always heard about the dangers of rat poison. “Rat poison is 99% good food,” they told me, “and only 1% poison.” The warning was that if you listened to or read something that was mostly true and had just a little bit of a lie, then that little bit of lie could send you to Hell for all eternity. Or something like that.

But here’s the problem: What’s in front of you on the dinner table may be 90% food, 5% silver or whatever they make silverware out of nowadays, and 5% porcelain. I haven’t tried eating porcelain or metal lately, or ever, but I don’t think it would be good for you. So why take the chance eating with plates and silverware? They could kill you. You might have to smash them a bit to get them in your mouth, of course.

The difference is that in the rat poison story, the truth and the lies are all mixed in together. In the silverware example, it’s obvious which is which. Or if you’re crossing the street, a single car can kill you – but how do you know? You look both ways before you cross the street. You use your discernment. You don’t eat porcelain plates or silverware.

God gave us brains. Words and ideas are helpful, certainly, but I’d like to think that I can spot nonsense. Or is it only pastors and youth ministers who can read a book and see that the content on pages 143-157 is completely unorthodox?

It’s funny because vaccines are only a little bit dangerous too. Exposure, over time, to a little bit at a time, especially if it’s carefully marked “BAD” helps our bodies gain discernment.

In The Princess Bride, the character Westley challenges one of Buttercup’s kidnappers to a battle of the wits. He places iocane powder, one of the strongest poisons in the world, in a single cup. The kidnapper thinks carefully, then distracts Westley, switches cups, and drinks Westley’s when Westley acts as though he knows his cup is safe. The kidnapper celebrates his victory until Westley explains that he put poison in both glasses. He’s spent the last few years building up an immunity to iocane powder. The kidnapper falls over dead. Same thing happened with a king named Mithridates. Then he tried to kill himself with poison. Didn’t work.

Another thing: they say that when you’re in foreign countries, don’t drink the water. Why? Because the water has stuff in it that’ll kill you or make you very sick, if you’re an American. The locals drink the water all the time, and exactly nothing happens to them. Why? They’ve been drinking it for their entire lives. Their bodies have built up immunities to the water. And probably a tapeworm or two, but I digress.

Let’s not be afraid to drink the water. The 99% truth is a big deal, and we may not get it anywhere else. The 1% of inedibles? Let’s get used to discerning the truth from the lies. Let’s not eat the dinner plates, obviously, but let’s read and explore. You miss out on quite a lot if you only do the one thing that you know is safe, and one day, that one thing that you know is safe may not be safe anymore. (That’s a lesson that I think the recent film The Croods teaches very well.)

3 thoughts on “In Praise of Eating Rat Poison”