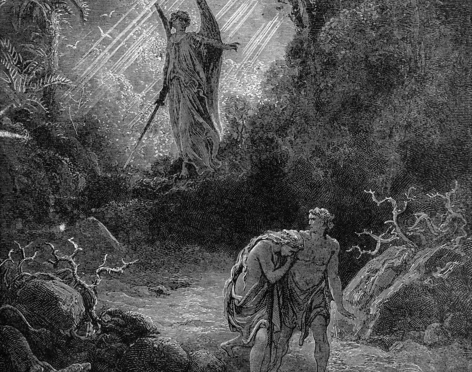 Introduction
For millenia, Christians and Jews have been reading Genesis 3 as The Fall. In this reading of the story, the first humans, Adam and Eve, who have been warned by God not to eat from the Tree of the Knowledge of Good and Evil, are tempted by the devil to disobey God by eating from the tree. They give in to the temptation, and their giving in leads unavoidably to the entry of sin into the world, and through sin, death (according to Paul).

Some theologians, like Augustine, have taken this to mean that every single person in the world is born sinful (and deserving of Hell). According to this blog, some of the earliest Christians didn’t interpret things exactly how Augustine did. Regardless of whether this interpretation is correct, I’d like to examine another possible way to read Genesis 3.

The footnotes to the New Oxford Annotated Bible points out several important things.
• The word “Sin” never appears in the Genesis 3 account.
• The word used to describe the serpent is “prudent,” a quality that is very positive in Proverbs.
• The serpent is correct in all three of his predictions: Humankind becomes like God (3:22), knowing good and evil (3:22), and they do not surely die on the day they eat of the fruit of the tree.

Myths
Our culture has been programmed to believe that myths are necessarily stories or narratives that are false. Even dictionary.com doesn’t have a definition that fits my purposes. Wikipedia’s article on narratives probably runs the closest to the definition I have in mind.

Another myth is the myth of redemptive violence. Our narrative says that the problem with the world is that there are bad people in it, and if we can just kill them or imprison them, our problems will go away. And this seems to work. Stories that repeat this underlying myth are true, not because they happened once, but because they happen all the time.

The Narrative of Genesis (skip this part if you already know what happened)
Every element of Genesis will not necessarily read in this myth, but I think a lot of it will. This story carries more than one line of truth or narrative in it.

God tells our first parents not to eat of the tree of the knowledge of good and evil or touch it, so they don’t die. The serpent is described as being prudent (as the word is translated nearly everywhere else in the Bible), more prudent than any of the beasts of the field. The serpent asks the woman if God really said not to eat from any tree of the garden.

Side story: When I was growing up, I was told that the serpent’s trick was asking “Did God really say…?” and that when we find ourselves wondering if God really said something, we’re probably being tempted by Satan. Any question or doubt whether God said something is viewed as a temptation from Satan. Which is a terrible way to live.

Anyway, the woman tells the serpent what God really said, and the serpent says, “You will not surely die; God knows that if you eat of the tree, you’ll become like gods, knowing good from evil.” So the woman realizes that the fruit from the tree is pretty and looks tasty, so she eats, and she gives some to Adam, who also eats. They both realize they’re naked, so they put on fig leaves.

A slightly anthropomorphized God walks through the garden and asks where they are. They say they realized they were naked, so they hid. Then follows the blame game of who tempted who and who gave what, at the end of which God curses the serpent and tells the humans how it’s going to be now. God’s going to make childbirth more painful for the woman and curses the ground on account of the man.

At the end of the story, God puts the kids in real clothes. He says, “They have become like us, knowing good and evil,” so he kicks them out of Eden to prevent them from having access to the Tree of Life. God posts a flaming sword outside the garden so Adam and Eve can never get back into Eden.

Strange Questions
• How were Adam and Eve supposed to know who was lying and who was telling the truth? Sure, they had experience with God, but like kids who meet someone smart who tells them their parents were deceiving them, truth is suddenly up in the air, and they don’t know who to believe.
• If they didn’t know good from evil before they ate from the tree, how could they have sinned in eating it, particularly if they didn’t know it was evil (assuming that it was)?

A Possible Interpretation
The story starts with innocence. God tells them not to eat from the tree. The serpent is smart – someone outside the original equation. He tells the kids they need to look into some new information. The penalties for this knowledge aren’t what God is telling them they are. They try it. They learn that they’re naked. When they learn the truth, they get kicked out of Eden forever.

Have you ever learned something you didn’t know before? Something that changed everything? Something that shattered your innocent world where nothing could go wrong and you could live forever? Something your parents wanted to shield you against? Yeah. That’s how I see the fruit from the tree.

The flaming sword could be a couple things. Sometimes, when you learn something that you didn’t know before, the authorities, the powers that be, kick you out of a place you thought was safe and comfortable and won’t let you back in. But you were never really safe to begin with. As long as that tree was there, as long as there was something you didn’t know that you could come to know, you were in danger – in danger of learning the truth that would get you kicked out of the happy place. You realized that you were naked – you didn’t have any clothes.

Or maybe the flaming sword is just the natural consequences of the knowledge itself. Your parents were trying to protect you from finding something out. You found out, and when you did, things got harder. You had to start paying rent. Your parents, like God, explain the realities of life that we’re now familiar with. The realities of life started hitting. And there’s no going back to that place of innocence. That’s the flaming sword.

You learn something new about the world. You used to have a simple and beautiful understanding, but someone shows you a video. A serpent shows you the fruit. You press play. You take a bite. And you find out things about the world that you never wanted to know. Hard things about the world. And you’re naked in their light. And some gracious and generous person comes along and clothes you. But the flaming sword that turns every way is in your mind, forever keeping you out of Eden, and forever blocking the way to the tree of life. You can’t go home when you’ve eaten the forbidden fruit.

The Takeaway
Is God deceiving Adam and Eve in this story? Bearing in mind the fact that this story is inspired by God, I would say that maybe to the authors of this story, he is – but in the way that many parents “deceive” their children by promising horrible consequences. Maybe it’s hyperbole – overstatement, like “If you kids don’t shut up, I’m going to pull this car over and drive back home right now.” He won’t. But the kids know there will still be bad consequences. And the consequences are indeed heart-rending. But even after the consequences, after the hard realities hit, after Eden is sealed off for good, God shows compassion by clothing his children. And I think this tells us something about the character of God.

Is the fruit bad in the story? Well, in a way – in the way that any knowledge we gain that pulls us out of our Edens is. And once we’ve left, even if you wish you could go back to not knowing, you can’t. That’s the flaming sword. I wouldn’t call this story “Paradise Lost.” I’d call it “Innocence Lost.”

What makes this story beautiful is that this happens all the time. With this mythic perspective, I can talk to anyone, even someone who doesn’t even believe that God exists, and show them something in the third chapter of Genesis that is undeniably true. Something to which everyone can relate. Is it the reading the people who wrote it intended? Maybe, maybe not. Is it the only reading? Absolutely not. Is it the best reading? Who knows?

What are your stories? When did you lose Eden?

I feel like I may have read a blog like this a while ago, but I’m not sure where. If you wrote it, please kindly comment below and link me to your blog so I can give you credit. Thanks!

One thought on “Innocence Lost: A Mythic Reading of Genesis 3”