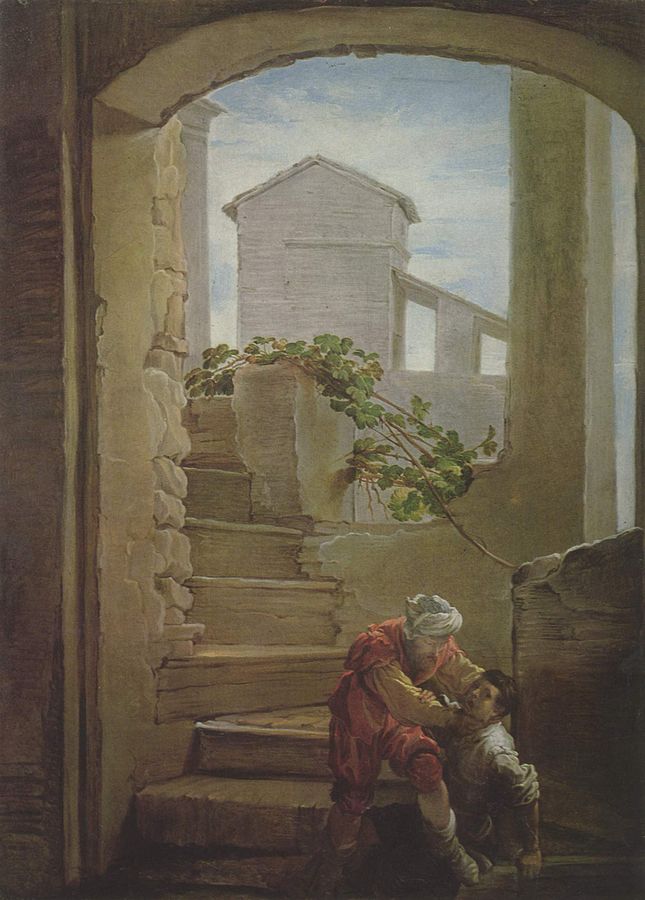 You’ve probably heard the story before. It’s in the Bible. Jesus is talking about forgiveness, and Peter asks how often he should forgive. Jesus says seventy-seven times, something an Episcopal priest once suggested is a deconstruction of Lamech, a descendant of Cain, who said in Genesis 4:24, “If Cain is avenged sevenfold, truly Lamech seventy-sevenfold.”

Then Jesus tells a story. It’s usually told something like this:

A servant owed the king an untold ridiculous amount of money. The king was going to sell him and his family into slavery to try to get some of his money back, but the slave fell down on his face and begged the king to give him more time so he could pay it all back. The king felt pity and forgave him all.

Then the servant saw another servant on his way out, a servant who owed him like five bucks. He demanded his money back, and when the other slave begged for more time so he could pay it all back, he threw him in prison until he could pay.

When the king heard what had happened, he called him back in and said, ‘You wicked slave! I forgave you all that debt because you pleaded with me. Should you not have had mercy on your fellow slave, as I had mercy on you?’ And in anger his lord handed him over to be tortured until he would pay his entire debt.

It’s a compelling story, but it’s even more compelling the way Jesus tells it.

Matthew 18:24 says the first slave owed the king 10,000 talents. The NRSV’s note says “A talent was worth more than fifteen years’ wages of a laborer.”

So let’s run that math.

You read that right. By American standards, this poor slave owed the king $2.62 billion dollars. A snowball in hell has an infinitely better chance than this servant has of paying this king off before they’re both several thousand years old.

But here’s the other thing: The Bible says “But that same slave, as he went out, came upon one of his fellow slaves who owed him a hundred denarii…” The NRSV’s footnote says “The denarius was the usual day’s wage for a laborer.”

So let’s run that math.

Let’s pause for a moment to appreciate that number. It is not five bucks. It is not a small amount; it is no paltry sum. It is nearly six thousand dollars. You can buy a pretty nice used car with that amount of money.

So let’s drop ourselves into this slave’s position.

He’s just been released from a massive debt. He’s free. Instead of being at -$2.62 billion, his net worth has suddenly increased to zero. Imagine him dancing out of the palace. He’s free, free at last.

But the further he gets from the palace, the more the weight of his situation begins to fall back upon him. True, he has no more debt, but he is also broke, and Dave Ramsey has advised him that three months worth of expenses as an emergency fund is an excellent way to stay out of debt.

As he ponders his situation, he suddenly sees his emergency fund approaching in the form of a fellow servant who owes him just over three months’ pay. He asks for it back nicely, and of course his fellow servant says he doesn’t have it and would you mind waiting, but this man has just escaped a mountain of debt the size of Everest, and nobody’s going to take him back, so his fellow servant had damned well better pay up now, or else.

Do you see what Jesus did with this story? In the popular telling, it’s $5. Now, $5 is nothing to sneeze at, but if someone borrowed $5 from us and didn’t pay us back, we wouldn’t take them to court over it. But $5800, or whatever we make over a three month period, is something else again. Of course, it’s nothing compared to $2.62 billion, but by most other terms, it’s still a significant sum!

When Jesus makes the amount owed 100 denarii, he’s agreeing with us that the sins and debts he asks us to forgive are significant. Jesus is saying that it is a big deal, but he is also saying that God often forgives us what we could never repay as well, so we should, in the same way, forgive others.

4 thoughts on “In Crazy Parable, Jesus Admits Sins Done to You are Significant”