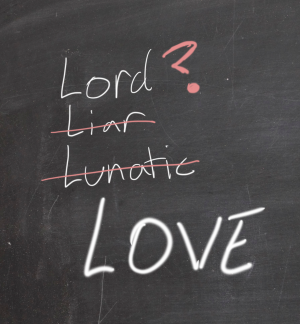 C.S. Lewis argued in Mere Christianity that Jesus Christ must have been one of the following: Insane, Lying, or God. Those weren’t his precise words, of course, nor was the phrasing of “Liar, Lunatic, or Lord.” Lewis proceeds to argue against Liar or Lunatic.

The key problem with this argument, as Joe Martyn Ricke once briefly noted in my presence, is that it is a fallacy.

When I was waffling about whether or not to ask Kristen to marry me, my friend John told me “It sounds like you need to either commit, or run.” He left out “leave things as they are” because he preferred I not consider it.

In the same way, Lewis excludes the possibility that what’s in the Bible and what Jesus said may not have been precisely identical.

The gospel writers occasionally differ on what Jesus said. In Mark, which scholars agree is the oldest of the scriptural gospel accounts, Jesus is not recorded as having claimed divinity at all! Mark refers to Jesus as “the Son of God,” but being the son of God and being God are different things, in much the same way that I am the son of my father, but I am not my father.

I still remember my college philosophy professor telling us, “There are many terrible arguments for God that nobody should ever use.” Lewis’ Trilemma is one of them.

But why go after the Trilemma, and why now? It’s because of this post from thinktheology.co.uk in which Andrew Wilson argues against Steve Chalke’s reading scripture with a “Jesus lens” to make Jesus nice.

Reading through the Jesus lens… involves reading a difficult text – say, one about picking up sticks on the Sabbath, or destroying the Canaanites, or Yahweh pouring out his anger – figuring that Jesus could never have condoned it, and then concluding that the text represents a primitive, emerging, limited picture of God, as opposed to the inclusive, wrath-free God we find in Jesus. Not so much a Jesus lens, then, as a Jesus tea-strainer: not a piece of glass that influences your reading of the text while still leaving the text intact, but a fine mesh that only allows through the most palatable elements, while meticulously screening out the bitter bits to be dumped unceremoniously on the saucer.

The strange thing about this, of course, is that Jesus himself seemed so comfortable with many of those passages, and affirmed stories about destroying floods, fire and sulphur falling from the sky, people being turned into pillars of salt, and so on. Not only that, but he actually added to them, by telling several stories that present God in ways that modern people are not inclined to warm to. (Emphasis mine)

Wilson then quotes several troubling passages from the New Testament, leaving our atheist friends applauding that finally some Christians have noticed that Jesus, as represented in scripture, seems rather appalling sometimes.

This is why I’m attacking the trilemma: both Lewis’ argument and Wilson’s assume the gospel-writer’s accounts are entirely factual and accurate. But the gospel accounts were written by different authors with different agendas at different times for different audiences with different circumstances and issues. All scripture is inspired by God and profitable, but that’s not the same as it being accurate in the way that a history book is accurate when it recites what year Christopher Columbus crossed the ocean to invade the “New World.”

Adam Hamilton used the image of the two great commandments as a colander, or sieve: We keep scripture that agrees with them (Love God, Love Neighbor), and wrestle with what doesn’t. Notice I said “wrestle,” not ” [dump] unceremoniously on the saucer.”

And I believe we must interpret all scripture through this colander – even the scripture that talks about Jesus.

But back to Lord-Liar-Lunatic, because even apart from Andrew Wilson, it’s important.

We American Christians have, in recent years, so thoroughly adopted modernism in its addiction to certainty and set of proofs that we have little space for mystery. We bought into the modernist insistence that if a thing is true then it can be proven true beyond any doubt.

But God is not like that. God, to borrow from Second Isaiah (Isaiah 45:15), is “a God who hides.” God is, for many of us, someone whose absence we feel more often and more profoundly than God’s presence.

We can’t prove God with logic. (God is difficult to disprove as well, but that’s not the same as proof.) Jesus never argued for God with logic. The apostles used some logic, but even Paul said he didn’t come with words of human reason, but that he preached Christ crucified. He preached the Kingdom of God exemplified in a God whose son died for his enemies, which trips up pure monotheists and leaves everyone else chuckling at your idealism and clinging to their guns and their second-amendment rights, thank you very much. I am not against logic, as I hope you know; I am against bad logic and the smug certainty prevalent in American Christianity today that leads to apologetics that, per Neil Carter, “isn’t for the lost; it’s for the saved.”

There are plenty of decent arguments for God, but Jesus did not teach us to make arguments. Jesus taught us to love God with our minds, and I don’t think that entails accepting stupid arguments for God, such as those presented in the recent display of Christian idiocy and misportrayal of atheists God’s Not Dead.

Our apologetic is our practice. Our argument for God is our behavior. Many an atheist has been warmed over to Christianity, not by solid logic, but by the warmth of the fire of love. Ironically, they then start writing books arguing that not believing in God is stupid, which makes no sense because logic isn’t what won them over.

The logic is there, of course, but God hides. There are plenty of truthful and honest reasons not to believe in God, but we live in the tension of believing without knowing. When we know for sure, it is no longer faith, but certainty, which Peter Enns calls the opposite of faith.

Is Jesus Lord? I say yes.

Is it because he was not a liar or a lunatic? No. This is shoddy logic.

6 thoughts on “The Lord-Liar-Lunatic Fallacy”