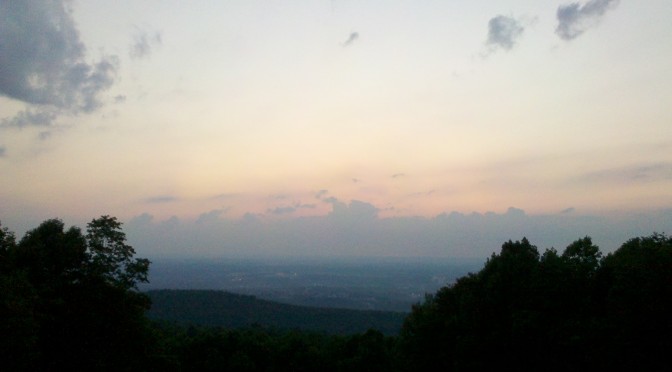 Thomas Edwards and I packed up the gear for the giant swing at Jumonville into my car and drove out from topside toward the cross. As we got there, we came upon Donna, one of the leaders for the group we’d been facilitating at the swing. She told us one of the most incredible stories about the ways some of the members of her group, a retreat for families with disabilities, had been treated at Jumonville and on their retreats as contrasted with everywhere outside. As we sat listening to her story in my old Honda, Thomas nudged me and I knew it too: this was why I’d spent the past four summers and he’d spent the past two here.

Donna finished her story, and we drove down in silence to the part of the road called Hairpin. I stopped my car and we got out to watch the sun drop slowly over those blue hills  miles and miles away. I told Thomas that my only regret for that summer was that I hadn’t stopped to see this more often. I stared out over the expanse, letting the last four years wash over my soul like flashbacks, hearing old, echoey voices.

The first was Scotty’s.

My friend Scotty introduced me to Jumonville, a United Methodist camp on top of one of the Allegheny Mountains in Southwestern Pennsylvania. We visited one unusually warm day in the week between Christmas and New Year’s in 2008. After an afternoon and evening wandering the campus, Scotty mentioned to me that “They’re always looking for people to work here.” In that moment, there in the driver’s seat of my car, looking around the campus with its almost magical lamps, I whispered words out the window: “God, could I do that?”

The first interview, where I met Ree Enlow and Larry Beatty. I vaguely remember Larry taking my picture; I remember playing games (at the interview!). I remember somebody asking Brittany Mancini what Jesus would say if he were there. “I think… he’d say something that would impact every single person in this room in a way they needed it.” We put Ree in the hot seat. I can’t remember what questions we asked her, but I know she ended with these words: “You are all already a part of the Jumonville family.” She looked around the little circle, about ten people in all, making eye contact with each of us, and spoke these words:

“You are a beautiful, unrepeatable miracle.
You are worth the air you breathe
and the space you take up.
God did not make a mistake when he created you.”

Cool, clean water rushed over my broken soul as I remembered people who had asked me what my excuse was for taking up space and oxygen.

I still remember where I was on Route 30 when I called to ask her to repeat what she had said so that I could write it down. I printed those words out. I framed them and hung them on my wall. A few months later, I sat in a room in Ree’s house, journalling. “I think she really believes it.” I didn’t know what to do. She believed I was a beautiful unrepeatable miracle. Me, with my sad history and sad story and lack of ambition and sense of purpose.

I used four-letter words in conversations with God in the chapel where I wrestled with not knowing what was going to happen next. I played ping-pong without a net in the office with Ashley, had a sword fight with spoons on the way up to the kitchen with Brittany, and told the most beautiful girl in the world that I liked her at the Adirondack chairs. I sang for Wednesday worship and told hundreds of kids that they too were beautiful unrepeatable miracles. I found a place where I could safely ask any question I wanted to ask about God, and found a music album filled with questions I’d always been afraid to ask, or hadn’t even known that I could ask.

I registered thousands of kids in those two summers, many of them returning kids. Some of them found out I wasn’t going to make it back next year, and they tried to talk me into coming back again, but I told them I wished I could, but it just wouldn’t work.

I learned to rock climb, to lead rock climbing, and to teach others how to lead rock climbing. Oh, but that’s just the vehicle for the confidence I found. Nate and Ree believed in me, and they taught me to believe in me. And one day when my competency broke down and an angry older man yelled at me for setting up one of his people for failure, on that day when the flood of tears threatened to break through my soul to my eyes, Nate looked me square in the face and said he knew what it was about, that it was about my self-worth and confidence all over again. Ree gave me twenty minutes to go cry, and I went to my room and wept through Psalm 139, letting scripture rebuild my value as a person. Then Ree took me into the back room and we went over belay training again until I got back my confidence.

I’ve learned that in spite of everything I’ve done and everything I continue to do, I am loved. Loved without condition and without requirement.

Thomas and I got back in my car and we drove back down. A week or so later when I turned in my keys, Ree cried. I haven’t cried yet, but I expect that it’s coming when it finally sinks in.

That night with Thomas, I stared out across the vast expanse spread before my eyes. It was as if God had made it just for me. Every inch of that property holds a memory for me; some inches more than others. I could go on for pages and pages with beautiful memories, and maybe one day I will. My heart ached that this was to be my final summer on staff at Jumonville. In some ways, it still does, but I know what I have to do, and I know that more than working at Jumonville for the rest of my life, I want to be a good husband and father, and I can’t do that on the hours I’d have to work to come back there when I’m done with college.

One last story: A former Jumonville staff member once told me that his two summers on staff were the best of his life. And I promised myself that I would never say that, that I would never think my best summers were in the past. For a while, my plan was to do everything I could to stay on at Jumonville. But now I can see my way clear to leave the place I love more than anywhere else on earth. It’s for the person I love more than anyone else on earth, and the people not yet born whom I’m sure I’ll grow to love more than any other kids on earth.

I love Jumonville, and I will always treasure the people and the memories from each one of my four Jumonville summers. But it’s time to pack up my metaphorical bags and go where God is leading me next. It’s bittersweet, but I know in my heart and soul and mind that it’s time. I’ve learned so much and been stretched so much. But it’s time to go be stretched somewhere else, in other ways. Teach For America, maybe.

God bless everyone. Much love to my Jumonville family and to all my other families. Peace be with you all.