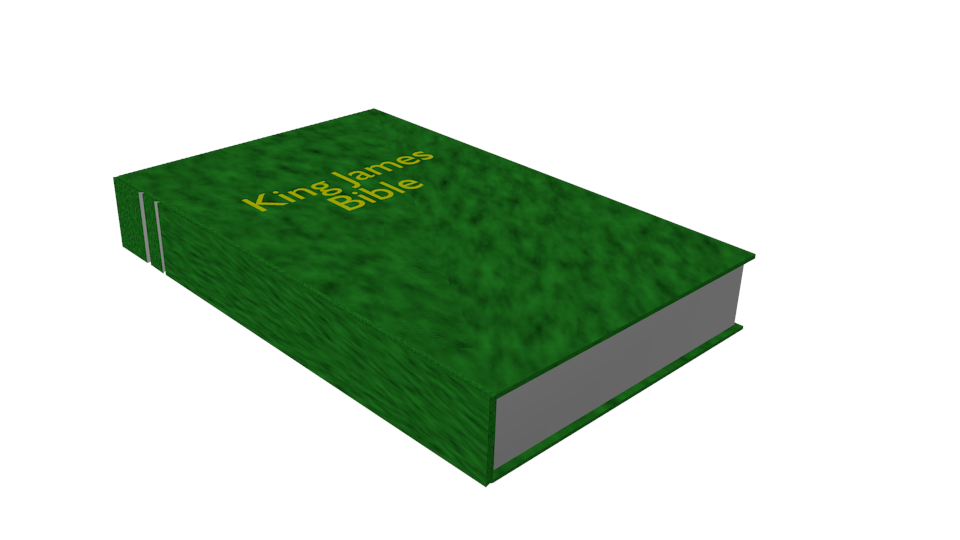 “Craig, all of heaven is rejoicing right now,” said Darren. “Luke 15:10 says that “there is joy in the presence of the angels of God over one sinner that repenteth.”

Craig brushed a tear away. “Darren, I’m so glad you came in today. I could be on my way to Hell, but now I’m on my way to heaven.”

“Amen, brother. Do you know any churches around here, Craig?”

“I think there’s a Presbyterian church a few blocks from my house.”

“Here’s the card for the church I go to, Craig. I hope to see you there on Sunday.”

“I’ll be there.” Darren shook Craig’s hand and slipped him a pocket New Testament. When Darren skipped away with his two cans of tuna, the five people behind Darren in line all breathed sighs of relief and pushed their carts forward.

When he reached his car, Darren picked up his Scofield Study Bible from the passenger’s seat and his knife from the glove compartment. He carved a notch in the spine.

Darren pulled into his driveway with his two cans of tuna. He noticed a big red and white moving van parked next door. There was a young woman carrying packages in. He made a mental note to go talk to her after dinner, and sent up a quick prayer asking God to help him find a way to reach out to her.

Darren had made a plate of cookies. He straightened up his tie and knocked on the door.

He rang the doorbell.

The young woman came to the door. She was taller than he’d expected. Darren started into his shpeel.

“Well hello, Jessica. I came over to bring you these cookies and welcome you to the neighborhood.”

“Why thank you, Darren, that’s so kind of you.” Jessica said it, and Darren did his best to avoid mouthing the words while she was saying them. People were predictable.

“I also wondered if you had a moment to talk about Jesus Christ.” These days that answer was a toss-up.” He sent up a silent prayer for a “yes.”

Jessica said “I suppose so.”

“Do you know if you died today whether you’d go to heaven, or hell?”

“I’m not sure if either exists, but I’d like to think I’d go to heaven, if there is one.”

“I wonder: have you ever told a lie?”

“What does that make you?”

“Human?” said Jessica. This was going better than Darren had hoped. It was almost word for word out of one of his evangelism movies.

“Seriously, what does that make you?”

“I dunno. I liar maybe? I thought we were going to talk about Jesus.”

“We are. But have you ever murdered anyone?”

“Well, the Bible says that if you’re angry at anyone, then you’ve murdered them in your heart. Have you ever done that?”

“Of course I’ve been angry at people, but I don’t think that’s the same as murdering them.” Jessica’s answer was a little off-course. He redirected.

“The Bible says it’s the same as murder, so what does that make you?”

“One of the ten commandments commands against misusing take the name of the Lord your God. Have you ever said “Jesus” when you hurt yourself?”

“And there you did it again.” There were two. That should be enough. “The Bible says that the wages of sin is death, and you’ve already admitted to being a lying blasphemer, and we’ve only talked about three of the ten commandments. Do you really think God’s going to let you into heaven?”

Jessica tilted her head. “I don’t know. It doesn’t really make sense to me that God would punish anybody forever just for doing stuff that they did in one life.”

“Would you expect God to let off sinners? If someone was a rapist, would you want God to let them off the hook?”

“The Bible says if you break one commandment, then you’re guilty of all of them. In God’s eyes, being a liar or a blasphemer is just as bad as being a rapist.”

“Wait, you’re serious? What kind of weird religion are you into?”

“I’m sorry, Darren, I don’t want to be rude, but I think you might be in a cult. I have friends who are Christians and they’ve never told me anything that silly.”

“If your friends haven’t told you the truth, then they don’t really care about you.”

“My friends definitely care about me. They helped me move. They gave me a ton of money.”

“If your friends don’t care about where you spend eternity, no matter what else they do, they don’t really care about you.”

Jessica slammed the door in his face.

“At least I planted a seed,” he said to himself.

3 thoughts on “A Notch on a Bible”