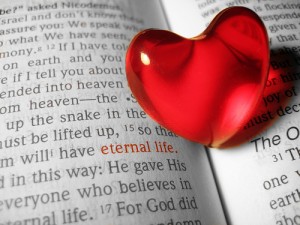 A couple of days ago I posted the top 22 verses that I hate. It got a very different reaction than I expected. Now I almost feel required to write a post about Bible verses that I love.

I love that passage because, for me, it’s Jesus’ opening message. It’s his first public speaking recorded in scripture. It’s the theme of Jesus’ whole ministry. He rolls up the scroll and says “Today this scripture has been fulfilled in your hearing.”

#2 – Those who Walked in Darkness
But there will be no gloom for those who were in anguish. In the former time he brought into contempt the land of Zebulun and the land of Naphtali, but in the latter time he will make glorious the way of the sea, the land beyond the Jordan, Galilee of the nations.

The people who walked in darkness
_have seen a great light;
those who lived in a land of deep darkness—
_on them light has shined. (Isaiah 9:1-2)

I love the feeling of restoration from this passage. I love how it tells the story of a people restored, because sometimes I feel like those people, and when I don’t, I want to.

This passage is totally obscure. Nobody has ever heard of it. I’d never heard of it until I heard Rich Mullins quote Psalm 137 (the whole thing!) and punctuate it with “That’s not the sort of verse you read at a pro-life rally.” I love it because this is one verse that looks like a command but that fundamentalists will never treat as an imperative. That’s why it’s my favorite Fundamentalist-conversation verse. In the middle of a conversation about inerrancy and obeying the Bible and taking it literally, I just drop “Well what about Psalm 137:8-9?”

I love it. I also love it because of a talk by Peter Rollins. He argues (beautifully) that they needed to get that out, that they had to say it to avoid engaging in actual violence.

I love this passage because I grew up with a lot of rules. Do this, don’t do that. God wants you to do this, God doesn’t want you to do that. Micah 6:8 breaks it down. Micah looks around at the children of Israel and their religious ceremonies and feigned righteousness and posturing and just says, “Look, this is what God wants, not all that. God doesn’t care about that. Even though the Bible explicitly said that was what God wanted.

Those of us who have heard this sermon a zillion times know that the greek word for the first two times Jesus asks is “agape,” that word that has come to denote unconditional love, and the last time, in this verse, it’s “phileo,” a sort of like or fondness.

I love this passage because of a message I heard by Chuck Swindoll. He told the story of Peter as a brash and intense disciple who, given “do you agape me” before the rooster incident, would have looked for a stronger word.Chuck Swindoll saw a humbled and honest Peter sitting now before his betrayed master, knowing the truth about himself and finally speaking it. Chuck next said that “God values honesty above false piety,” and I saw myself in the mirror. This was six years ago for me and I still remember his exact phrasing and exactly where I was when I heard those words.

I love this verse because it goes over and against any lies against God that would argue that God does things that are unloving.

#7 – Reconciling the World to Himself
that is, in Christ God was reconciling the world to himself, not counting their trespasses against them, and entrusting the message of reconciliation to us. (II Corinthians 5:19)

There is so much to love about this verse. First, God in Christ is reconciling the world to himself (not himself to the world as some theologies argue). God doesn’t need Jesus to reconcile himself to the world. The world needs Jesus to reconcile us to God. The difference is huge. God isn’t taking out some kind of divine rage on Jesus. God’s attitude toward man had never been anything other than love. This is not the story of an angry God who punished his son so he could forgive others. This is the story of a loving God who went to insane lengths to draw his lost children home.

With Not counting their trespasses against them. Paul is at his rhetorical peak. He jams so much beautiful theology into this passage that it’s crazy. God, reconciling the world to himself, not counting their sins against them. We would tend to think that God has a ledger where he keeps track of what we do wrong. Paul tells us that this is pure nonsense.

I love the vibe from that. It’s like Genesis totally gets this feeling of looking and looking and waiting and hoping for “the right one” to come along. Other translations, even more literal ones, miss that “This one, at last” bit. I always look this one up when I’m checking out Bibles to see how they translate it.

#9 – Come to Me, All You Who Are Weary
“Come to me, all you that are weary and are carrying heavy burdens, and I will give you rest. Take my yoke upon you, and learn from me; for I am gentle and humble in heart, and you will find rest for your souls. For my yoke is easy, and my burden is light.” (Matthew 11:28-30)

When you live a story for so long with angry pastors and at least one demanding parent, this Jesus looks pretty darn good. This Jesus reminds me that the constant push and shove to do better and be better and work hard and try harder… isn’t what God had in mind. It never was. God isn’t forceful.

I know some people don’t count The Message as a real translation, but I absolutely love Eugene Peterson’s take on this passage:

“Are you tired? Worn out? Burned out on religion? Come to me. Get away with me and you’ll recover your life. I’ll show you how to take a real rest. Walk with me and work with me—watch how I do it. Learn the unforced rhythms of grace. I won’t lay anything heavy or ill-fitting on you. Keep company with me and you’ll learn to live freely and lightly.”

I think we all need that. Take a load off.

Jesus is normally this really calm dude, and I’m imagining him being super-calm and saying that line. He’s just like, dude, aren’t you wrong because you don’t know the Bible or God’s power? And he’s saying this to the scribes! These are people who are seriously OCD about the scriptures. Jesus is telling them that even though they’ve read the Bible a zillion times, they still don’t get it.

It’s a lot like he says in John 5:39 that these people study the scriptures looking for God and don’t get that they’re about him. Honestly it reminds me a lot of fundamentalists who think they have eternal life in the Bible (though they will say otherwise). Everybody misses this:

Christianity is not about the Bible.

Christianity and the Bible are about Jesus.

3 thoughts on “10 Scripture Passages that I Love”