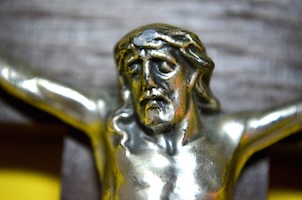 It all started with Abraham, the man of faith, who not only questioned God but had the chutzpa to question God’s motives, demanding ever so politely whether God would destroy the righteous with the wicked and passive-aggressively asking if the judge of the earth wouldn’t do what was just, and then negotiating like the Jew that he was until he talked God into not destroying Sodom if there were only five righteous people left.

Abraham’s grandson Jacob continued the tradition when he spent a whole night wrestling with God. God gave him a new name for his trouble, and Israel has been the nation of God-wrestlers ever since.

And then there was Moses, who debated God about his qualifications to lead Israel out of Egypt, who insisted vehemently that God had gone with the wrong guy and said that if it was all the same with God he’d just as soon go home and leave the job to somebody else, and after God gave him two miracles, he asked if Aaron couldn’t do the job just as well. And of course when God decided he wanted to be shot of all of them some years later, Moses crossed his arms and asked “What will the neighbors think?”

And who could forget Gideon, who asked for two signs in a row right after God spoke to him in an audible voice and wasn’t sure even then, or Barak, who told the prophetess of God that he would only feel safe going to war if she went with him, or Samuel, the prophet of God who knew the mind of God better than God did, or Elijah who ran away from Jezebel and then stuck his finger in God’s face and said “I have been very zealous for the Lord God Almighty… I am the only one left, and now they are trying to kill me too.”

These are just the beginning, added onto shortly by Job, who repeatedly demanded his day in court with God because God had done him wrong, and who God said spoke rightly about God.

Job was followed by a whole slew of psalmists (David especially) who spent half of the psalms wondering wherever in the world God was, and one of whom openly wondered in Psalm 73 why he bothered with righteousness at all. And then there was the author of Ecclesiastes, who decided the whole show and shebang was meaningless, and the author of Lamentations who had the gall to complain that God was attacking him.

And Peter. Who could forget Peter, the guy who had the chutzpa to step out onto the stormy sea and lost his faith halfway through? Peter and the rest of the disciples generally made fools of themselves by asking stupid questions that if they hadn’t asked half of our New Testament would be missing, and Thomas, who was from Missouri and had to be shown, and the one who had the hardest questions of all…

Jesus, sweating blood and bullets over his impending execution, bargaining with God and asking “My God, My God, do we really have to go through with this?” and later nailed to the cross and doing God’s will and rasping out with his last breath “My God, my God, why have you abandoned me?” Let us never abandon our faith tradition of questioning God.

2 thoughts on “The Long and Distinguished Tradition of Questioning God”