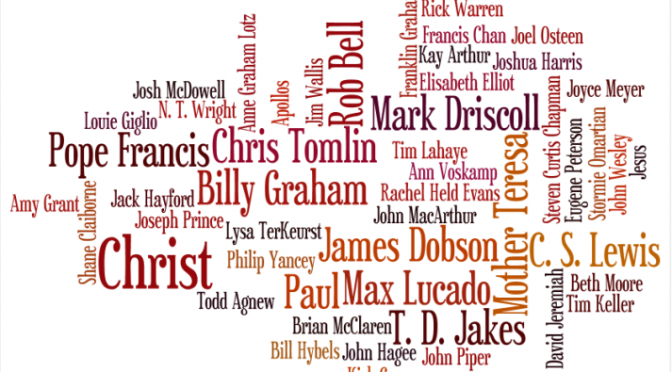 Part of a The Despised Ones synchroblog on Christian Celebrity

If you’re a Christian, chances are that you’re familiar with most of these names. Even if you’re not a Christian, you’d have to have been hiding under a rock not to know at least a few of them.

A Few Words of Context
For the past several months, I’ve been honored to be a member of a blogging cooperative called The Despised Ones. The notion is that “The Despised Ones is a collective of writers and bloggers pursuing a radical way of following Jesus in the shadow of empire.” The verse in the logo, I Corinthians 1:28, has often been mistranslated, but Morgan Guyton, one of our group’s resident professional ministers, thinks the best translation is as follows:

“He has chosen The Despised Ones and those who are not to bring to nothing the things that are.”

So as a member of this blogging community formed around this scripture and this idea, the question for the month is “How does Christianity interact with celebrity?” I have seven responses.

1. Celebrity is a Platform
Celebrity is a platform. All of a sudden, people are interested in what you have to say. A few weeks ago, I wrote a post about Twelve Myths Too Many Christians Believe. It got over 5,000 hits. I was pretty excited, but the celebrity status that I enjoyed was fleeting, and that’s okay.

Celebrity, from the perspective of the celebrated person, means that for a few minutes, people will listen to what you have to say and give it more credence than they would have before you were famous. But ask Rob Bell: It will only last until you say something that offends people. Being relevant and hip and smart works very well when you are upholding the status quo more or less, but it will only last you until you deeply offend or challenge your core audience. As long as you keep standing for what you represent to your base, they will love you, but if you abandon that, they will abandon you.

2. Celebrity is a Means to Know Who(m) to Respect
Some people may be more willing to listen to “famous Christians,” but I’m not sure who those people are. I think for the most part, we listen to those we think have a special sort of authority. People with titles like Pastor, Doctor, and Reverend are professionals, but at least for me, I think for the most part when someone gains celebrity status, I read their work and judge it on its own merit, regardless of how awesome or not-awesome my cool spiritual Christian friends think it is. (However, I do admit to having been more willing to read The Message because my friend Sean had a copy.)

But I’d rather see a doctorate in ancient near eastern studies or something like that than celebrity. I rely more on the writers of the notes in my New Oxford Annotated Bible than what Rick Warren says. Sure he’s famous, but these people are nerds.

3. Celebrity is a Shorthand Categorizing Method
Sometimes people feel things and can’t articulate them in a way that they think is meaningful. Our celebrities are the people who get things out that most of us believe but cannot articulate well, or in the case of apologists, cannot argue well. (Speaking of which, why is Kirk Cameron now a leading apologist?)

Sometimes our celebrities inspire us to believe new things. Rob Bell and Brian McClaren rocked my world a few years ago with their thoughts on faith, but a number of people didn’t agree with what they said. To say “I like Rob Bell” was to articulate that I agreed with many of the thoughts in his book. To say “I dislike Rob Bell” was to articulate that I think that he is wrong and many people are going to Hell because God says so.

Christian celebrities, in that way, can become shorthand for the beliefs and ideas that they put forth. It allows us to categorize people quickly: “He likes Rob Bell,” “She reads The Message,” “They believe in Left Behind.” It allows us to put people into categories so that we don’t have to listen to them. Which is really just our brain doing its job. Our brains like to save time, so they looks for slots to put people in. Which is wonderful if we’re organizing things and ideas, but not so much if we’re doing it to people.

4. Celebrity is Self-Serving for Fans
We live in a world that allows us to choose our own news and our own celebrities. I follow people on Twitter because I find them interesting. I follow people on Facebook because I want to know what they have to say. My “celebrities” aren’t world-famous. They’re people who get their names in the bottom line of the Huffington Post religion e-mail and I get to say “I’m in a Facebook group with that guy!” I doubt that my celebrities are incredibly famous outside of their individual worlds.

All that to say that I follow those “celebrities” because I want to know what they have to say. They aggregate information that I want, and they have comments on that information with which I agree. In a way, it allows me to decide what I want to hear and (if it comes from someone I dislike) what I do not wish to hear.

5. Celebrity is an Ancient and Modern Means of Dividing
There’s a story in one of Paul’s letters where he freaks out a little because there are divisions in the church:

There’s nothing new about this celebrity culture. Paul and Apollos and Cephas were celebrities in the early church, but Paul also upbraids portions of the church at Corinth for avoiding the human-celebrity culture by saying “I am of Christ.” If Paul could see our denominations today, he would probably turn over in his grave.

So in the long run, it truth and in reality, how important is celebrity? How powerful is a platform?  How useful is it, in following Christ’s command to love God and neighbor, to have a platform? To be theologically correct? To categorize the neighbors Christ commanded us to love by whether or not they follow Joel Osteen or Rob Bell or, God forbid, Tim Lahaye? To get our news tailored to our worldview?

Can we not serve side by side with our brothers and sisters, even if we disagree with them on certain celebrities / theological issues? Could not a calvinist and an arminian scoop soup into the bowls of the homeless, side by side? Do we really need a platform to love our neighbors? I doubt it. But I don’t think that I would mind having one.

6. There are not very many female Christian Celebrities.
Just an observation. We should probably do something about that.

7. Celebrity can be a Means to Spread Grace
Maybe some deserve celebrity status, though – the ones who inspire us to love God and others, to see the face of our Savior in the least of these his brethren and sistren. Those who heal hurts with their wise words. Their “celebrity” is simply a vehicle for God’s grace to come to the hurting and for God’s love to flow more freely.

Their fame, like Pope Francis’s, becomes simply a channel through which God’s fame streams.

May the grace of Christ be with you.

We very much have a “Christian Celebrity” culture. People who have large followings are seen as experts and are admired and looked up to and get book deals and speaking gigs. What are the pros and cons of this and how do you relate to it? Do you find yourself in the tension between disliking Christian celebrity and wanting to be a part of it?

WordPress stripped out Javascript, so if you want more go here: http://www.kellyjyoungblood.com/2013/11/cats-emily-dickinson-christian.html

Or for the other submissions, go here: