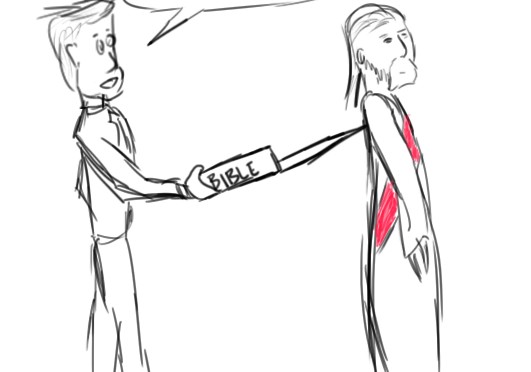 We live in a world desperate for certainty. Presidential candidates offer guarantees of what they will do if they are elected. People buy new cars because they want a warranty. Girls want a guy who can commit. Kids want parents who won’t leave. Amazon and eBay both offer buyer guarantees. The government requires motorists to buy insurance, and we buy from Wal-Mart because we know what to expect and that we can take it back if we don’t like it.

We even try to get assurances from God. Why are there so many successfully selling versions of The Bible Promise Book? Why do tracts and preachers ask if we are certain of our salvation?

We live in a legal-heavy society. If someone advertises something and doesn’t deliver it, we get mad because it’s false advertising. And then we think that way about the promises of God. We think we can trust God, not because He’s inherently good, but because He has given us these exceeding great and precious promises. Or, put more plainly, our trust is in His promises, not in Him.  Our trust is in the knowing that God’s holiness or righteousness or something somehow holds a rusty switchblade to God’s back and says “You said it, now You have to do it!” On an off-note, this idea is tightly linked with the idea of Hell: “God said some people would go to hell, and He’s a liar if He doesn’t send them there.” So if God doesn’t send people to Hell for all eternity, then nothing else He says is trustworthy either. This should reveal to us where our trust is (God’s promises/word) and isn’t (God Himself).*

This is a huge problem. Honestly, it’s like we hold scripture to God’s back and say “See! You said You would, so You have to!” What in heaven’s name is comforting about a Father you have to threaten with Child Protective Services if He isn’t good?

This is something God has really been dealing with me about lately. I don’t trust God. I trust God’s promises.

That’s not okay. But why should we trust in God Himself, not just try to manipulate Him by His promises so He can’t get away and do something we don’t want Him to do? As one pastor put it, “It’s like we’re trying to con God into being good, as if He isn’t.”  But why should we trust Him? How can we know that He’s a good Father, not one we should be threatening with CPS?

Jesus on the cross.

We should trust God Himself, not just His promises, because Jesus on the cross shows us a God who is safe. Not safe in the nothing-bad-or-difficult-will-ever-happen-to-you safe, but safe in the ultimate sense. A God Who lets Himself get nailed to a cross to heal His broken creation, to clean up the mess that we made, to separate us from what lives in us that makes us afraid of Him? That God is safe. A God who lays aside His lightning and thunder and omnipotence and spills His own blood – for us – is a God who is safe for us. He may not be safe for who we think we are, but for the “us”es that are deepest inside, the “us”es that we were made to be, He is safe. Not only safe, but Redeemer. Rescuer. Great Savior. Hero.

He stood up to the religious right who were oppressing the weak and said “No more of this.” (The religious right, of course, didn’t hear any of it, and if He came back, they’d probably crucify Him all over again). The law of the first testament, with its lists of do’s and don’t’s, He took onto the cross and God nailed it up there and killed it dead to rights. This God is trustworthy. He died in our defense. He conquered that which we most fear: death itself. What a Father. What a Brother. What a Savior.

We are inclined to see God through a lens of fear and terror. We fear what we cannot understand. I fear what I don’t understand. And I’ve lived through so many different iterations of God that sometimes I can’t tell what’s God and what’s legend about God. You and I would both do well to take a good, long, hard look at the cross, and let the things people have told us about God fall away.

The apostle Paul said it well nearly two millenia ago:

“He Who did not spare His own Son, but gave Him up for us all, how will He not, with Him, graciously give us all things?”