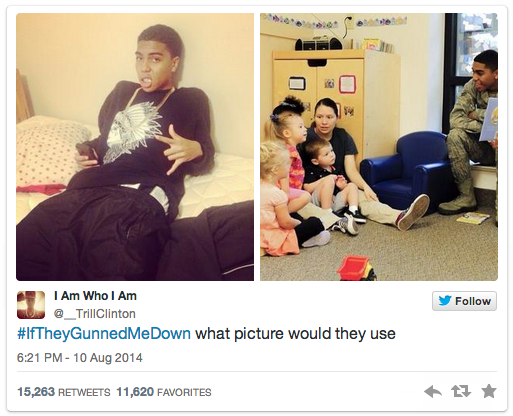 Last week a post on World Magazine denouncing Michael and Lisa Gungor for not reading the Bible the way the World Magazine Editors know is the only way God ever intended it to be read went viral. People responded. Relevant Magazine responded. The evangelical and post-evangelical world went crazy. Blog posts were written and tweets were fired.

Then Mark Driscoll got removed from the Acts 29 Network that he started. Lifeway Stores pulled his books. Blog posts were written and tweets were fired.

And then Ohio police shot and killed a young black man named John Crawford because he was holding a toy gun in Walmart. White Christian twitter was silent. No blog posts were written.

Another young black man, Michael Brown, got into an altercation with police on Saturday in Ferguson, Missouri. A shot was fired inside the car. They both got out, and the police officer gunned down Michael Brown. Some sources say the cop put 8 bullets into the boy – a boy who was due to start college today. This happened Saturday. I didn’t find out until Sunday, and that through a friend of a Twitter follower’s retweet of an Anonymous tweet. White Christian twitter was silent. No blog posts were written.

Yesterday a riot broke out in Ferguson. Looting happened. A community sick of the stop and frisk culture and the systemic racism in American culture got out of control. Black people think the police exist to protect and serve – to serve whites, and to protect whites from black people.

While the white Christian world debates who’s going to hell, the African-American community is already there, and nobody seems to give a damn.

While the evangelical twittersphere was debating whether Mark Driscoll should step down from his pastorship, members of the black twittersphere were guessing which picture of them the media would show if a white person or a cop gunned them down. This is the world we live in. As my wife Kristen said, “We’d rather focus on who’s going to heaven or hell than the social injustice.”

I’m done talking. Look at these. Click the hashtags. Read the news stories. Give a damn.

#IfTheyGunnedMeDown, which photo would be used? Left or right? pic.twitter.com/KwimvvI921

#IfTheyGunnedMeDown would they use my pic on the left or the right? pic.twitter.com/W3W1EUMXvz

EDIT: Right after I finished blogging about systemic racism, Christena Cleveland called me on my own. The fact that I hadn’t seen this is evidence of the fact that I didn’t follow any black Christians.

Christena Cleveland blogs at http://www.christenacleveland.com and has a list of recommended Bloggers of Color. Start following some of them.

14 thoughts on “While You Were Talking About Gungor”