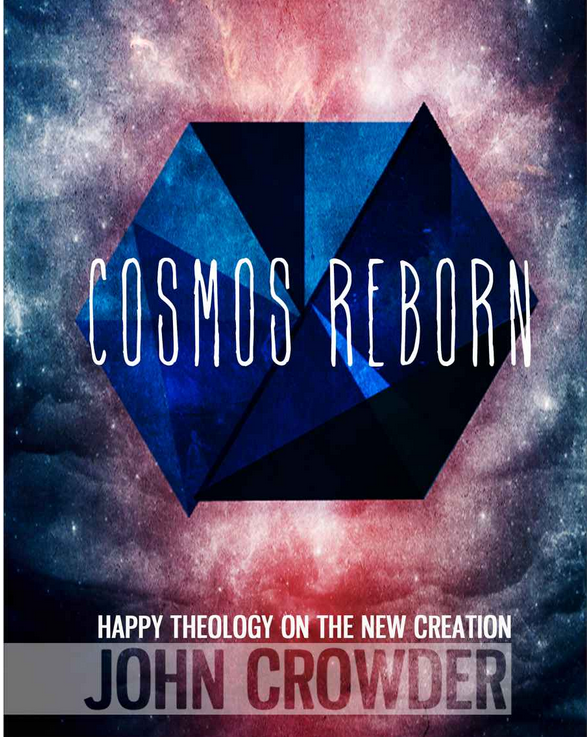 I’m pretty sure that if I died and came back as somebody else, I would come back as John Crowder.

The fine folks at The Speakeasy sent me another book to review, which is fabulous, because I love books. I hope they’ll forgive me for the lateness of this post because the book took a while to read, and I kept putting it off.

When I saw this book available, I was so psyched. I can’t even tell you how excited I was about this book. I watched the trailer, I was even more excited. (Here’s the trailer.)

I got this at the same time as Living the Questions. I read LtQ first. Then I cracked Cosmos Reborn. I read the introduction. I liked John Crowder. I read the introduction, called “I am and am not a universalist.” He borrowed the quote from Robert Farrar Capon, whose work I absolutely love, and whom he quotes repeatedly throughout the book.

By page 33, John Crowder has said, “Scandal number one: The Bible is not the word of God. Yes, the Bible is fully inspired and it’s the means by which we see Jesus. But Jesus Christ – not the Bible – is the Word.” I’ve said that elsewhere myself.

To be completely honest, I spent my time in this book with about three different attitudes:

1. This book is really boring.
2. That is so wrong. I can’t believe he just said that.
3. OMYGOSH THAT’S THE MOST AMAZING THING I’VE EVER READ IN MY LIFE!!!

Seriously. I was pretty bored for decent chunks of time. I would drag my eyes through paragraph after paragraph, and then I would read something ABSOLUTELY INCREDIBLE and post it on Facebook or text it to a friend.

Background: I don’t highlight books. Ever. I tried it for a little bit in college with textbooks (I think) but I eventually thought it was lame. I highlighted Cosmos Reborn.

In chapter two, The Case for a Loving God, Crowder blasts Penal Substitutionary Atonement. Seriously. He empties an entire clip of theology into it, reloads, empties another one, and THEN burns its house to the ground. He makes us choose between God being loving and God being evil, not just. Watch:

Everything was going fine. All was perfection until one day – lo and behold – mankind did the unthinkable. He ate God’s apple.

Now, nobody does that! You can’t just disobey God and get away with it. Somebody has to pay the price. God became fuming angry. God, in His holy narcissism, suddenly became enraged. Spitting mad. God’s holiness had somehow been offended. He was personally peeved. The scales of balance ha to be set aright. “God is love,” we are told, “but forget not his wrath!” Justice had to be paid. That apple had to be accounted for. Somebody would burn over this. Someone was going to feel the full force of His raging, maniacal fury.

Bloodthirsty, God’s anger had to be appeased. He had to wreak vengeance and destroy. “I’ll teach you to eat another apple!” And so, with purple veins bulging from His temples, His wild eyes red hot with destruction like Thor swinging His lightning hammer from the sky God was about to open a can of destruction … give you what you deserve. Filled with bloodlust, He reared back his arm … about to unleash the hot kraven of hell on mankind. …

But wait! Suddenly Jesus steps in (good cop, bad cop), jumps in front of you … And instead of God hurling His bloodlust upon you, He unleashes it upon His own Son … satisfying his rage by brutally murdering His own child.

This is the part where we are supposed to stand up and cheer.

Here is the good news, “God really hated you, but since He savagely massacred His own Child, He’s decided to love you as long as you pray this prayer…”

How convenient, to make God in our own image. A God of our own making who is conveniently less moral than we are.

I have read atheists mocking penal substitution before, but they have never managed to make that version of God look quite that awful. And that was just the first clip.

Crowder goes on to attack the ridiculous and unbiblical notion that God abandoned Jesus on the cross. I highlighted where he wrote,

The Father doesn’t abandon anybody.

Beautiful. And then on the next page he calls doubt a sin, a notion with which I expressly disagree.

I schlucked through the chapter on The Vicarious Man (A pretty decent read about Jesus). I got kind of excited when he talked about incarnation vs Greek Dualism. It was interestingish.

And then chapter four was titled “Hell is Sort of Real, But Heaven’s Door is Always Open.” I was kind of excited.

He launched into a fabulous and brief apologetic for Universalism. He quotes the “All” verses. For several pages, he quotes the All verses. Like his attack on Penal Substitution, it’s almost overkill. Almost. In the end, though, he acknowledges that there are verses that disagree with the All verses. He takes C.S. Lewis’s idea that Hell is locked from the inside, and even quotes The Great Divorce. And then he comes to this beautiful bit that I quoted on Facebook a few days ago:

God is a Judge whose whole shtick is non-judgment… “This Son, strangely, does not judge, but rather saves. Not only in this verse, therefore, but throughout the Gospel of John, there lurks the image of the rigged trial, of a judgment at which the judge is shamelessly in cahoots with the guilty world and utterly determined to acquit it no matter what,” writes Capon.

That last part landed on my wall. I got out my highlighter. And then he stated he wasn’t preaching Universal Reconciliation. And THEN he pulled out the Orthodox view of hell, which I love. And he talked about the ancient Christians and their ideas. Which I also enjoyed. I think he borrowed a few pages from Love Wins as well.

And then chapter five was called “The Faith of God and Why You Should Give Up.” He argues that even the Sinner’s Prayer™ is a work (as I have argued before). Trying to have enough faith is a work. “But let’s put faith in its proper place. Otherwise, people are not putting their trust in Jesus Christ. Instead, they are trusting their own belief in Jesus Christ!”

And another horrible pseudotheology just got pwnd.

I shlucked through chapter 6, “The Case for Divine Complacency,” and dragged myself through “Born from Above,” and made it through “The Divinity of Man.” The book had a total of eight chapters.

The Way The Book Looked
My wife is a graphic designer. I am a lifelong bookworm. I think the biggest issue I had with this book wasn’t the theology, but the typography. The margins were so narrow that it felt like it went on forever. They used a sans serif font, which is great for the web but horrible for print. Some of my struggles came from the textual choices that were made. Things that look fantastic on the internet don’t look quite so good in a printed book.

Final Thoughts
I liked Cosmos Reborn. John Crowder is a fascinating and insightful theologian. I think this book is worthwhile, even if you only read the three chapters that I enjoyed. I wasn’t really challenged by it because I mostly agreed with him, but I would certainly like to share the chapters that I enjoyed with other people.

Want a copy? Get it on Amazon.

Disclosure of Material Connection:
I received this book free from the author and/or publisher through the Speakeasy blogging book review network. I was not required to write a positive review. The opinions I have expressed are my own. I am disclosing this in accordance with the Federal Trade Commission’s 16 CFR,Part 255.